It was Baptist's 100th anniversary on Tuesday, and big festivities were planned. Every employee was to receive a gift, and there were a lot of food trucks out in the parking lot. 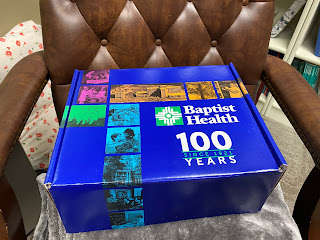 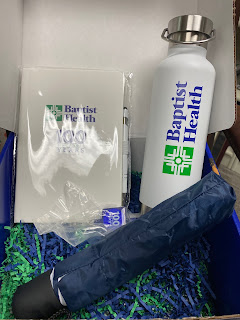 In the gift shop on Monday the sales girls were blowing up big 1-0-0 balloons. Amy read the news in huddle on Monday and transcription  was all abuzz.

When Amber and Janet came up with their gift box and showed us the stainless steel water bottle and umbrella and pen and journal set we got so excited to get our own - I grabbed Tina and Kimberly and Jan and we walked down to the cafeteria. There were rules. You had to get a number at the front and go get your badge swiped then go to the correctly numbered table. There were six tables with pyramids of gift boxes and more and more pyramids of gift boxes behind to re-load the tables. I haven't seen that many people in the cafeteria since they gave out free food during snow week.

When we walked up to the ladies giving out numbers - admin, I recognized them - they gave me a number and turned my secretaries away. Told them contract workers do not get a gift box. We all recoiled, and I told Tina I would give her mine - she has worked for Baptist for over 20 years only recently became PLA. Tina turned away in disgust and Jan followed her. The ever positive Kimberly, who Rex loudly wondered if she was running for governor last week (we all had a good laugh) decided to stay with me and see if she could find a back door. I was angrily telling her this smacks of lab week WTH. If they are going to offer gifts and turn people away they should warn them in advance so they don't get hurt.

Sure enough the crowds were thick and the lines were long but they happily swiped her badge - she excitedly called Tina and told her and Jan to return and told them exactly what to do. I got my gift at table number one and smiled at the CEO Troy Wells in the receiving line and Mayor Scott was there as well. I got a little sweaty in the crowds and was unsure of the outcome and lost Kimberly so I texted Tina that I was going back upstairs.

We were all triumphant when the girls returned with gift boxes and everyone was praising Kimberly's genius. I told Melody and Quinn and Shaver about it - they didn't know. Melody missed the cafeteria, but when she was finishing up an apheresis consult today she walked into admin suite and asked Laura for a box - Laura gave her one from under her table. At about noon Quinn came in my office with a story.

He told me a little later in the evening on Tuesday - they were giving boxes out until 8:00 - he went down to get one. He stood in line and showed his badge to someone from human resources - there were about 10 people scanning badges. She asked about his u number, like me he said I don't have a u number I have a p number I'm with PLA. She gave him this long rigamarole about how contract workers cannot get a gift box and kept persisting - he said people were looking at him it was really embarrassing. His badge said Dr. Quinn. We are on medical staff that makes us Baptist. He told it in a funny way that had me laughing so hard all day today thinking about it - some random chic following a blanket rule that should not be black and white (or even exist). I told him about Melody's success and told him he should go to admin suite he said I don't know. I still have a lot of PTSD from that incident. LOLOL.

Arbitrary ignorant rules inferiorate me. The dress code at Episcopal comes to mind. The first thing Jack's teacher told him on the first day of school in first grade was that his shirt was on inside out there was a bathroom across the hall go change it. I hadn't even noticed. No praise for putting it on by himself? No hug welcome to my classroom? We grew to love her, but that institution had some of its priorities backwards. Give my daughter detention for not following the exact dress code? When she decided to go to Central, she was so nervous about what to shop for and wear. I told her let's buy a few basics you like, and when you see what everyone else is wearing we can branch out. She quickly caught on, created her own look, and eclipsed mine.

I called in sick Monday for the second time in fifteen years - first was when I broke my jaw. I woke up at 3am with alternate chills and fever feeling so bad I wondered if I needed to be carted off to a death hut. This was last year's experience times one hundred. I told S I wouldn't shower but he would need to dress me in a t-shirt dress and get me to work somehow - I was imaging him putting me on a dolly like that movie years ago with Ryan what's his name and the mannequin. Probably a little delirious? In retrospect that would have been poor patient care. He called in too and took good care of me.

I was telling Rex about it this morning and he said he's called in once in 31 years in hypertensive crisis. Competitive much? You beat my track record, I said. I told him last night's ejection was so epic it was no longer just retching I think I'm expelling demons. Sure sounds like it. He said maybe you should get on with the Conjuring? He hadn't seen any of them but I love every one but the last was not very memorable. I said they would love to record my voice for expelling the demon possession parts it hurt my ears but by now I'm used to it so I just try to enjoy it - it only lasts a minute or two. Then I can dry my tears and blow my nose and enjoy a drink. I stopped on the way home to get him a bottle of wine - tomorrow is his last day and I've got a good wall around it but I'll break down at some point when it's safe. S is safe in Austin after a long drive. Visiting dad and stepmom. I'm flying out Saturday with the kids. Kallie may come spend a few days with us so excited. Alone in the house for the first time in a long time - kids are at dad and stepmoms grilling cheeseburgers. Think I'm going to tuck into a book Melody lent me that I read half of the other night. Intellectual brain candy thriller. Happy Friday Eve, much love, Elizabeth