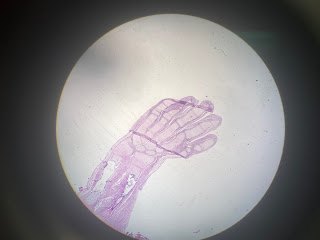 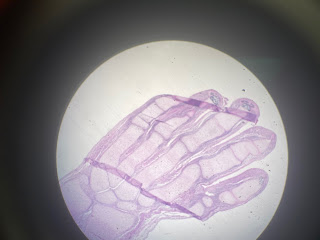 So I had a POC today with a hand, the second one I've ever seen. So cool I shared with multiple text groups and I was hesitant to share on social media because POCs are so political these days. We require a permit to process fetal tissue under 12 weeks, which this was, bc of the legislature. And then there's the sensitive issue of miscarriage, I don't want to trigger anyone. I reminded my alarmed daughter that nature takes it's course - if there is a miscarriage it is usually because it wasn't meant to be viable. All my path friends were geeking out. It invokes awe. To anyone who doesn't believe in higher powers, I think it flies in their face.

Today was emotionally challenging in more ways than one. Cases hit non-stop starting mid morning and there wasn't much room for air. I was excited when my daughter texted that she had a dr. appointment, I got to see her, but got stressed when she became anxious. What is it about teenagers? They can be cool most of the time but then their world is ending and you have to be careful not to get dragged down support is your job but holy hell. Parenting is a job.

Christy and I are planning the mid May Chicago trip I'm so excited I can barely stand it. We got first class plane tickets this morning for a steal and she shared a bunch of hotels yesterday we chose EMC2 it looks eclectic and sciency and artsy so cool! Right on Michigan Ave.

Another tumor board this morning, CARTI general, and Diane presented a bunch. I chatted with Matt Steliga at it's conclusion he told me he helped Muesse with the flap, on the exposed heart, last night they used the latissimus dorsi. Praying for a good outcome. I discussed a crazy rare case I had last week Bandy took out a boggy uterus he thought was a molar preggo but it was all in the lymphatic system. Invasive hydatitform mole. I'm not sure I even learned about that in training but it was unmistakable Shaver agreed so I signed it out she needs chemo maybe 20-40% metastasize OMG.

Tomorrow is my last day for a week I'm taking a micro tech Valerie out for lunch so excited. Then driving trip to CB with multiple teenagers someone shoot me JK. Looking forward to lots of time in the condo (it has a fireplace in the center with glass enclosure in the living room) maybe write that Melnik article finally and get some reading done while the fam and friends are skiing. Hopefully snowshoe. Definitely partake in the good food options. Hope you are having a good week. Much love, Elizabeth