I cannot take credit for this amazingly parasite nerd statement. One of my PMG pathology sisters (over 800) posted this a couple of days ago with a pic of a worm, asking "Ascaris?" 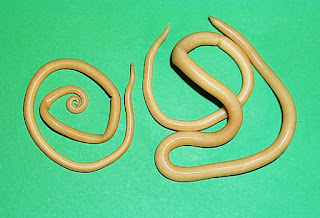 I cribbed this off the web bc, strict rules about not taking pics from PMG pathology

Everyone agreed. Ascaris lumbricoides. A dream specimen - this one was found in the stool of a child and mom brought it to the ED. It was bottled and still alive when she removed it from the plastic container. It measured over a foot. Most of the comments centered around puke emojis and WTF gifs but I was most impressed with "What the helminth?" I think I am going to start saying that every time I see a worm.

I shared the story twice today - kind of fishing for an Ascaris story. The head of microbiology did not disappoint. "We had one case, about 15 years ago. Everyone talked about it for months. I think it was in LRDC, there was a patient with an orthodontist appointment. I guess the anesthesia drove the worm out. It came out of the patient's mouth, when they were under. The nurse fainted. The ortho doc sent the specimen to us. It was still alive too." I was amazed. This is a once in a lifetime case. If you live in a developed country, I guess.

This was a hellaciously busy week. I presented a tumor board for the second time this month - loved it. My quick thinking was probably lost on all the clinicians in the room - but the pathologists were impressed. Normal cerebellum, which is what I called on frozen, can look astonishingly like metastatic small cell from the lung.

And the week ends a day early - I am headed to LA tomorrow for a 1920's flapper party in Beverly Hills. Going to meet a lot of previously only online mom doc friends. I feel like I am going to the moon - haven't been to LA in thirty years. Simona Bot and her husband grew up in Romania and currently reside in LA. She is hosting a party for 60 people. They outgrew the clinician bubble with biotech skills and patents. My friend Tuhina told me their house was like Lifestyles of the Rich and Famous. One of the other attendees wrote a memoir of her journey from Cambodian refugee to doc in the US. I'm going to read it on the plane.