So Jack and I have this game. I bought these sayings, painted onto wood, and we try to surprise each other with them. Kind of like Elf on the Shelf but all year long. Most of the time we really aren't that creative. But occasionally he catches me off guard. This time in my closet. I was surprised and overjoyed. 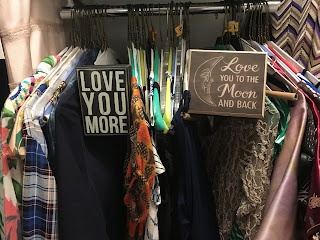 Making online friends become IRL friends is a bit of an effort. But it pays off. We took Mr. Are You Living the Spicy Life (a walking meme, according to his lawyer mom, and yes I agree) and the infamous maybe a like interest Izzy to dinner tonight after they played all day in the pool - a rendezvous initiated by my almost twelve year old and his encouraging older sister. Their conversation was indelible.

Russ: "So you've never done the cinnamon challenge? It hurts."

J: "What's up with all these people taking those new Cheetos to school? Flaming Cheetos are ok. But that new lime twist? So fake. Some guy took a family size version the other day and ate the whole thing. Disgusting."

Russ: "Is that a mushroom on your salad? Can I have one?"

Russ: Proceeds to torture Jack with the mushrooms . . .

Me: "Am I missing something?"

Russ: "Jack hates mushrooms. This is so fun."

Izzy: "Did you know that we just played three rounds of Mortal Kombat in the back room? Two with Russ and one with Jack. I won all three."

She said this with ultimate humility and pleasure.

Russ: "She had a superior character to us."

Me: "Accept your failure with grace. Grace makes the world go round. That, and Flaming Cheetos." 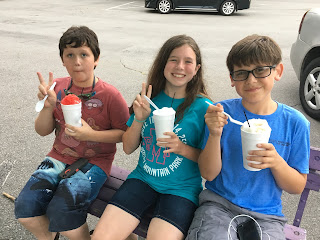 Russ, Izzy and Jack, in that order
Tiger's blood (not in my car!), lemonade, and wedding cake mixed with homeade ice cream (Jack learned well from me at a young age - we all agreed his was the best).
Posted by Gizabeth Shyder