I got a call from an endocrinologist early this week about an adrenal case I had signed out with Dr. Music in December. "The symptoms are coming back. Are you sure it's medullary hyperplasia? Are you positive it isn't an incipient pheochromocytoma?"

"Well, I trained with a chair who wrote the first adrenal fascicle, he's a world expert, but admittedly these cases are rare. I haven't seen a pheochromoctyma since I trained. Would you like me to send it off?"

"Yes please, where will you send it to? How long does it take?"

"I know a guy at Cleveland Clinic, Dr. Genius. I trained with him when I was a resident. I've never sent an adrenal out, but I'm sure he can handle it or show it to someone who can. He's the quickest turnaround I know."

"Thank you so much."

I told Dr. Music the plan, since his name is on the report. "Sounds good, yes send it to Dr. Genius."

I got an e-mail from Dr. Genius last night. "Family's great, thanks for asking, I'm traveling way too much for work. Your case just showed up on my desk. As expected, no tumor."

I bragged to Dr. Music in the hall this morning that as usual when we have a finalized case that gets sent out at the request of the clinician we were right.

"What the heck is an incipient pheochromocytoma anyway? Have you ever heard of that? By the way, incipient is my favorite word this week, thanks to that endocrinologist. I've decided this morning I'm an incipient murderess. The drilling has become so loud and incessant that I had to dig out my earplugs and wear them again, but they only dull the constant din. I'm not sure of my target yet, but when it happens it will be very spontaneous and chaotic. Watch out."

"I have never heard of an incipient pheochromocytoma either. Is that a thing? I haven't googled it yet. By the way, isn't this (he points to his arm) an incipient tumor? Aren't we all incipient tumors headed for the Grim Reaper?"

Turns out there is such a thing as incipient pheochromocytoma. This is the full blown malignant pheo. 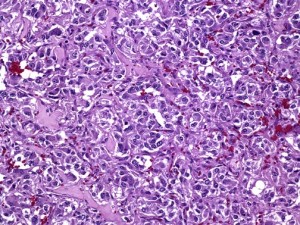 Zellballen sheets of polygonal cells in a complex vascular network

The gross image is super disgusting so I'll leave it out of this very clean prim and proper blog.
Posted by Gizabeth Shyder