Mid-morning, while I'm reading my GI's I become determined to find someone else who hasn't heard of vodka tampons. I decide to call Dr. Music on the intercom.

Me: Well that sucks, because I'm on the hunt.

Dr. Music: And I'm being hunted? Not sure if I like that or not.

Me: I'm looking for someone, besides me last week, who has never heard of vodka tampons.

Dr. Music: That sounds crazy. What if you don't have the right orifice?

Me: I hear from my friend that it works in the other one down there too.

Me: I don't know, I've never been breathalyzed so I don't know the technology. But I would think it would register less, not having been sitting in your stomach.

Dr. Music: Maybe they will make an assalyzer.

Me: I was thinking a vaginalyzer. Not too farfetched in our current political climate.

Dr. Music: Yeah I saw that pic on Facebook of you and your husband at the Woman's March. I can't believe you dragged him up there. Did you make him wear a pussyhat?

Me: Hell no. I hate them too, but you can't always choose the symbols of your movement, you've just got to run with it. There were 30-40% guys there, by the way. Way more than anticipated. And three of S's male colleagues called him to thank him for participating in the March.

Me: I posted tons of pics. I didn't carry a sign, I just took pics of signs. I'll text spam you when I'm done with my GI's. I made a series on Instagram. I'll even send you some that I didn't post - because they were pretty salty and I know I've got a big following from C's friends. Your wife will love the pics.

Dr. Music: She will. I can't even have Trump or Trump news on the TV - she will run and attack the television.

Me: I'm trying to take it all in as entertainment. A necessary step to a better future. Helps me cope.

Dr. Music: Yes, I'm spinning it that way too.

Me: Except it's hard when people are held and detained at airports by misguided officials because of their religion. Then it's not so funny.

Dr. Music: Can't argue with that. 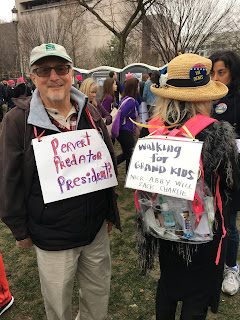 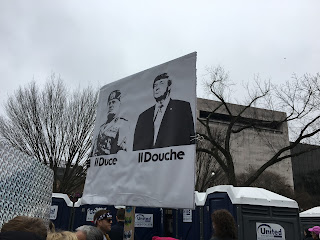 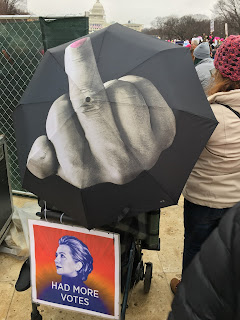 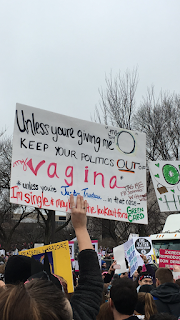 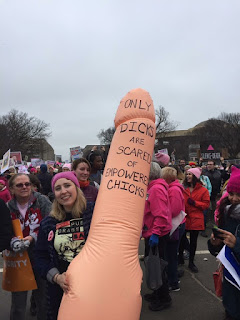 I took the first four, but I can't take credit for this last pic I cribbed it off of a Democratic facebook group I think? Not sure if it was in Washington or not. Ballsy chick, though.
Posted by Gizabeth Shyder

Lol. I heard about a "Trump skis in jeans" sign...