My daughter, 13, independent of me, decided to read The Devil's Knot by Mara Leveritt and base her yearlong history Capstone project on it. She spoke to me excitedly a couple of months ago about the details of the case. I told her I was here, I lived it. "Do you want me to hook you up with an interview with a forensic pathologist at the Crime Lab? I know Frank Peretti."

I've bought the book, but I haven't read it. Of course I know about his persecution, reading blogs and articles. It's been 11 years since I rotated with him at the Crime Lab, but he's a nice intelligent guy.

"Careful C. Evidence always has a spin. Keep an open mind. I'll work on it."

After many e-mails with his assistant over the last few weeks, I finally secured an interview at 4:30 today. Her last e-mail instructed me to meet him not at the Crime Lab, but at his private mortuary off of an exit near the airport. I got covered, got off early, and picked up C at the school.

We arrived at the mortuary five minutes early, after trying to secure some bottled water at a closed up chained off gas station - the only one we could find off of the exit. We were greeted by two coroner vans in the parking lot - one of the coroners nicely directed us to his office. We played with an eager dog - not sure of the breed, but it was regal. The assistant entered the hallway from the mortuary.

"I can't believe I missed you coming here. I was supposed to put the dog up. I'll let him know you are here."

We waited on the couch. When he entered, he looked disheveled as always, and surprised. "I know you!" I guess his assistant didn't tell him.

"Yes, I rotated with you for a month at the Crime Lab. Great to see you." I got up and gave him a hug.

Cecelia gave and recorded a thoughtful and intelligent interview that lasted a half hour. I was impressed with her knowledge of the case; I stayed silent in awe and respect. He turned the popular media impression of the case of the West Memphis Three over on it's head. She was clearly enamored and partially mind blown. His facts flew at the celebrity opinion in the face. She had much project fodder and he concluded, in his Northern accent blunt way, one that was used to testifying cases in a courtroom, that his opinion was correct. As soon as I become unshackled, he assured her, when I retire, I'm going to write my own book.

I'll leave the details to her project.

When it was over I asked, "So what do you have over there? How many tables, one? Dr. Woods told me about your private mortuary, but I've never seen it."

"Do you want a tour? We've got three tables."

"I'd love one. What about you (Cecelia)? Do you want to see? There are dead bodies in there."

I watched my daughter steel herself and answer emphatically. "Yes."

I worried. I'm a mother, that's our job. Plus I've been there. I asked the assistant for some candy - sugar or carbs. She produced a fortune cookie out of her purse, and I encouraged C to eat it.

As we walked through the room entering the mortuary there were four dead bodies on gurneys. In the mortuary, two of three gurneys were occupied. One was a large male that hadn't yet been autopsied. The other was a female whose autopsy was complete. Two men were about to embalm her. I looked back at C to make sure she was ok.

"They don't look real, they look like wax figures."

"Good, keep that mentality. That will help you."

The woman had her face peeled backwards over her skull. Her organs had been removed, so her ribs and body cavity were prominent. There was a pool of blood in the body cavity. We were regaled with stories - of her death, of his, of other interesting deaths in the past week - one's that we promised not to tell. It was thrilling for me to finally have C interested in what I do.

Peretti and his crew were impressed with C's countenance. "Why don't you watch me do the autopsy of her organs and brain?"

She was game. She donned an apron and gloves and he walked through the anatomy of the healthy organs. I stood over them like a mother hen; her asking questions, he explaining. At one point, the embalming guy called us over to the woman whose organs we were dissecting. "Look. This is so exciting. I've injected the embalming fluid into her right carotid. Look at her face."

Half the face was pink red with life, the other half drained of color in death. I remarked, "I've never seen this. You could draw a line, right down the center of the face."

He said, "It's remarkable, what anatomy does. I've only injected into the right carotid. Look at the results."

"Mostly alcohol, and a heavy dose of red dye to make the body appear as it was in life."

We wandered back and finished the autopsy - brain, cerebellum, brainstem, adrenals, lungs, spleen, liver, gallbladder, aorta, thyroid, esophagus, trachea, kidneys, and finally the heart. C was enraptured. I told her this would take me all day to do, but these guys are experts, they can do it much faster.

The humble Peretti told her that they are quick because they are experts, and these are healthy organs. The nature of her death made it go by fast. Homicides, he told her, can take hours. "Your mom does disease. We don't know disease. When we run into something we don't understand, we turf it to her."

As we were leaving I asked him if we could do a follow up interview, in a month or so, at his house. "I heard you are a turtle expert, that you have quite a live collection. Dr. Woods bragged about it. We would love to see it - her project isn't due until May. Can we come check it out?"

I hear he has a turtle exhibition dedicated to him at the Memphis Zoo. He has donated many rehabilitated turtles to zoos.

"Anytime. You have my number. I'm taking care of those turtles all weekend long, every weekend. Would love to see you." 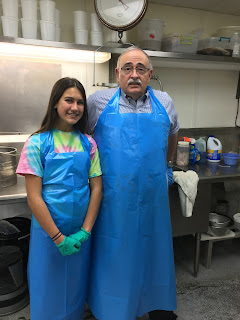