Police officer: So the only thing of value was a rock? Tell me about the rock. When was the last time you saw it?

Me: It's a rare rock. I bought it this summer and was transporting it to my office. I left my car unlocked, accidentally and uncharacteristically, overnight. When I left for work at 7:15, my car had obviously been ransacked. I don't expect to find the rock, but when I posted in Foxcroft neighborhood it was apparent to me that many other cars were ransacked last night.

Police officer: It happens in every neighborhood. What is so special about this rock?

Me: It was named after the founder, I think it was in 1976. He named it for his daughter, Larissa, and the Spanish word for sea, Mar. Larimar. You can find more on Wikipedia. It's only found on one square mile of the Earth. A perfect storm of sea and copper. It's beautiful. Here's a pic I found on google images. 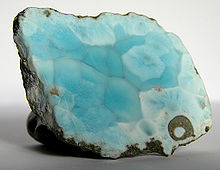 My rock is not as big as this, it's about the size of a lime, but less round. It cost around 600-700 dollars. The one I really wanted was 3K. Too much. There is only one rock dealer for this rock, that I know of, in the US. They are based in Colorado.

Police officer: When I hear the words rock dealer, I usually go in a different direction, in my head.

Me: Yes, some girls collect jewelry, other rocks, but I'm a fossil and rock collector. This is the most I've ever spent on a rock. I know I'm not going to find my rock, I've already given it up to the Universe. But I wanted to report so you could maybe step up night patrol around here. It's a problem.

Police officer: Yes, it is in every neighborhood. One guy in the Heights caught some of them on deercam. We arrested them. Your stretch is very dark - you need more motion lights. There aren't enough street lights.

Me: Yes I've noticed that. Tried to exercise before dawn, and got so scared I went back home to the treadmill.

He was very nice. We chatted about kids and pets: geckos, snakes, cats, dogs, and ferrets. We both agreed spiders were not an option: me relaying my freak out pull over on the side of the road if a miniscule spider falls from my visor - him telling me about shooting a tarantula because he was afraid to get too close. He talked about how beautiful my house was, and wanted to know more about a mural in the living room. 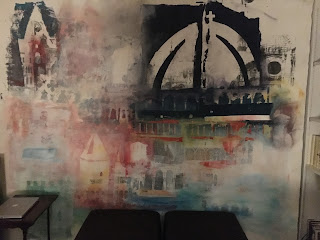 Me: Oh that's my cousin Eleanor. She's super talented - traveled the world and trained in printing in Knoxville and in advertising in Atlanta at Portfolio. She's hiked Machu Picchu. I think most of this is Turkey.

Police officer: Check pawn shops and Craigslist. But I doubt you will ever see your rock again.

Police officer: I'm glad you told me it was in a white box. I think I recovered your rock in the drain next door. 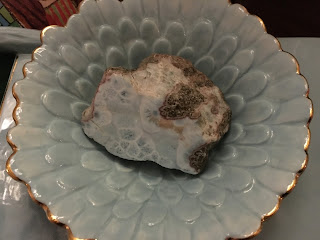 Me: Can I give you a hug? Is that ok? Thank you! I'm so excited. Happy holidays to you.

Now all of Foxcroft neighborhood knows me as the crazy rock lady. I'll own that.
Posted by Gizabeth Shyder