Me: I've got an interesting case. Guy stuck a candle up his ass. They had to convert to open. He had a colostomy.

Dr. Woods: That happened to me a few years ago! Did I tell you about it?

Him: He said his mom wanted it. It was covered in feces. He was skulking around the gross room like the unabomber. Hoodie, bad affect, the works.

Me: Do you think he really wanted it for his mom?

Woods: Hell no. Who knows why he wanted it back. Cheeky lad, to get what burned him.
Posted by Gizabeth Shyder No comments:

I met a good friend at Camp Aldersgate when I was 15. She was 14. Let's call her Sunny (Urology resident I love - I've got two med students this month - their names are Sunny and Cherry. I feel like I'm at Woodstock.)

Sunny is still a good friend today - a furniture mogul. Back then she was the daughter of a blooming one. She lived in Salem, AR. I had the hardship, so would drive to her house to spend the night.

We met at Respite Weekend. We both volunteered. Respite weekend at Camp Aldersgate was different from the summers. No real categorization of disease. Just caregivers, mostly parents, dropping off their kids so they could have a weekend alone. Moderate to severe Down's Syndrome. Severe Cerebral palsy. There was even a Prader-Willi. He was almost one on one - trying to keep him away from food. I heard his parents put a lock on the fridge.

I was enamored with Sunny - she looked like a model. Her cool countenance belied her country upbringing. One night we left Aldersgate on break and went to a convenience store with the express purpose of buying a Playgirl magazine. In retrospect that store clerk must have been amused, but we were anxious, and being the older one I did the deed. Later that night back at camp we marveled over who in their right mind could be turned on by such foolish images.

I guess it was my junior year of high school. I drove to her house, and we decided to go running around with two of her guy friends. She was sweet on one, and hoped I would be sweet on the other. He was cute, kind of reminded me of my cousin, but nothing went beyond that. We drove to a cul-de-sac in my 1983 Oldsmobile Toronado convertible and shared some Purple Passion. Everyone but me drank a little too much - I was driving.

Next stop - Salem grocery store. Sunny was feeling a little queasy so I went to the bathroom with her and helped her recover. When we got back into my car we were startled by blue lights behind us. The officers searched my car and found a case of stolen beer. Seems the guys decided, while we were in the bathroom, to steal some beer from the back of the store.

After spending two hours under police questioning and stony disapproval from the store manager in the box (remember when grocery stores had those areas? Boxed in with tall plexiglass? Don't know what kind of business went down there maybe returns? Or purchasing cigarettes? For me it's just the humiliation of that night) they let Sunny and I go. The boys convinced the authorities that we had no knowledge or partnership in their plan to steal the beer.

I think I became marked, at that point, as a bad influence. Our friendship continued through snail mail, but we didn't really get close again, despite being at Hendrix together, for many years. Then she needed nanny help. Then she supported me through divorce - she'd been there. Now my daughter and her stepkid are in the same grade. So we see each other on occasion. If I ever really needed her, she'd be there in a second, I'm sure.

The Nightingale: Hey! I'd like you to meet palliative care doc. She's going to talk to us today a little bit about what she does.

Me: Nice to meet you! I've seen your name in the charts. I'm a pathologist. I love the idea of being a palliative care doc - always wanted to.

The Nightingale: You should do it!

Palliative Care Doc: You can come on rounds with me sometime if you want.

Me: I would love that.

The Nightingale: Ok everyone let's start. I've got someone to introduce you to. She's going to talk about palliative care. I've used her a few times and she is excellent. Not just for hospice, also for inpatient pain, depression, and dementia.

Swagger and Sagacity: So tell me this. The hospitals have a reputation for sending nurses and social workers to my patients and talking them into getting hospice consults. Then they end up taking over my patient, who I have a long relationship with.  Sometimes years. Just because my patient is in a pain or  depression crisis - because hello, they have CANCER - they in no way need a hospice consult, but they and their family are easily convinced they do and it becomes such a mess for me to clean up.

The Owl: That happens to me too. Makes me so angry. I call them. I yell at them! I yelled at a hospitalist the other day who did that very thing. If you yell enough maybe they will learn.

The Nightingale: This doesn't happen when you consult her. I've only had good experience, and she stays in close communication with me about the patient and the decision making process. But I know what you mean. Believe me. A cancer patient in pain crisis is the perfect set up to be duped into thinking this is the end. This is why we are so important. We are in charge, at this moment. We know the patients better than anyone in the hospital and we are trained to know the disease process more than the patient or their family. Everyone needs to listen to us. I think it's good that she is here, she will help to turn around this problem. Educate and care for our patients with us. See? It's good to have these conversations. We all learn why there is such a stigma around consulting hospice and how trained individuals are part of our team, not working against us. I'm really glad you came. Ok, let's move on to the patients. Who wants to go first?

"I'm glad they waited until 8:15. Done with tumor board. What is the frozen?"

Requisition: "What tissue is this?"

"Are you serious? Ugh that surgeon. Histology 101. Is he crazy?"

"Um, I'm doing a sleeve gastrectomy. Am I near the stomach?"

"Ok, thyroid. He's in the thyroid. That was easy. Next frozen?"

The Nightingale: She's in a lot of pain. She has pancreatic cancer. She was crying in my office.

The Bear: We can help. Celiac plexus nerve block. For those of you who don't know, let me show you. Here's the origin of the SMA. Here's where the celiac artery takes off. See this? It's the celiac plexus. They wanted us to pay $500 for 100cc of absolute alcohol. We only need 10cc. So we are looking elsewhere. That's a ridiculous amount of money.

The Nightingale: So how long does it last?

The Bear: Forever. It kills.

Greenie: Does it work for pancreatitis?

The Bear: Not so much. We try, but results aren't good. For cancer though, it works well.

Greenie: What is it?

Swagger and Sagacity: Can I get some of that?

The Nightingale: So I've got another one. 64 year old female with a history of lobular breast cancer, ER PR positive Her2neu negative. Been managing fine for 5 years. Now picked up leptomeningeal spread on MRI scan. Asymptomatic. Healthy, doing well. What should I do?

We all looked at the meningeal enhancement on the MRI displayed at the front of the room. The radiologist pointed out the areas. Various scenarios of treatment were kicked around.

Swagger and Sagacity: I'm glad the word "Omaya reservoir" was not uttered from anyone's lips. That's like trying to rearrange deck chairs on the Titanic.

I remember seeing routine positive CSF's from a case in Conway, until we no longer covered there a year or so ago. This lady had ductal, though. The CSF's were obtained through her Omaya reservoir. When I first saw the fluid, I thought "This lady's a goner." Eight years later she was still alive. I gathered based on this conversation that she was an outlier.

The Owl: Yeah, that'll buy you two months, maybe. It's a big waste of time.

The Nightingale: Thank you all that was really helpful. I mean lobular? Chronic disease. She will be alive for a while. 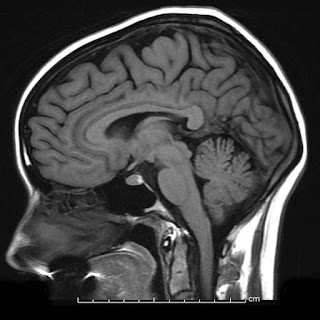 Here's a normal brain MRI I cribbed off of the web. I hope her next scan looks like this.
Posted by Gizabeth Shyder No comments: