Women of The Word

We've been tossing around a title for a couple of weeks. I think this one is going to stick.

My daughter went to Camp Ozark a few weeks ago - she wanted to sign up with some friends last Fall. I didn't know it was a religious camp when I paid for it. When I belatedly realized, I told her she had better be ready to "Get your God on."

She laughed, she doubts like me; but to both of our surprise, she came back hungry for knowledge. My devoutly Catholic sister sent her a teen devotion book and a journal, both of which she immerses herself into, and emerges peaceful.

Ironically I bumped into an old friend at the Racquet Club a week later. "We are starting a Sunday School class for single mothers. My friend's idea. I would love for you to join."

"It sounds like a great space. I searched for it hungrily when I was divorced. The only place I found was led by a male therapist, ugh. I wanted a female vibe. I'm in."

I don't know much about the Bible but I figure if C wants to learn, I need to as well to keep up with her.

There are some important things I have learned in the three weeks I have attended:

If you hit a deer with your car, you can call the Food Bank and they will process it for the hungry.

There is a charity called the Arkansas Hunger Relief Alliance. They will send volunteers to collect the grains that farmers leave behind, before they torch the fields. They use the leftovers to feed the hungry kids in Arkansas. Bear with me here. Ruth is a great biblical figure who revered her mother-in-law. When they were starving they traveled to find food, and did the same for themselves. While they were collecting leftovers an estate owner fell in love with her and took them into his home.

There are many inspiring women in the Bible who were prostitutes. Mary Magdalene - questionable. Rahab - not.

You don't have to be a single woman to belong to this group. You can be married. You can be never married. You don't need to have kids. Most are divorced but this is not a requirement. Much to my relief I will not be kicked out when I am married this fall.

I learned in my first class that the Bible is a story being played out to this day. It's not all judgement and damnation - a story I learned as a youth - it's much more. No one cares what you believe, you can just learn the story. One full of sin and bloodshed and yes, redemption. So many parallels to our current angry climate. The Old Testament is like the Old West: Scary to be there, yes, but we are here today like they were back then. Drawing guns and choosing sides.

But there are no sides, there don't have to be anyway. Like I tell my daughter, it is more important to be heard than to be right. This small group of women is a beginning of a chapter. We are going to get organized, to discuss The Greatest Story Ever Told (one I have yet to learn), and to talk to each other. We want to make the invisible our mission. The women and children. Education and hunger. Simple but important.

My brother told me he had a great mentor during his training as a criminal defense lawyer. He is a musician, like my brother. He said, "The Beatles got it wrong. It's not : All You Need Is Love." 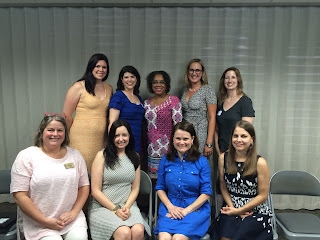 Church newsletter photo. Becky, my friend, is on the bottom left. Art teacher, single mom, mentor to me during my divorce. We traveled to Crested Butte together with our kids, along with my friend Katie, on my first Spring Break as a single Mom. Melissa, royal blue standing up second to left, is the brainchild of this endeavor. I'm so excited to be getting to know her and eternally grateful for her counsel.
Posted by Gizabeth Shyder