The summer before my Senior year of high school, I took Scuba Diving at University of Arkansas at Little Rock. I was 15. I got a hardship when I was 14 to help run my little brothers and sister around, so I had already been driving for a while.

I signed up for the class to avoid taking P.E. at my high school. I had procrastinated P.E. because I detested it when I was little. At Montessori, there was a hard core teacher that made us do crunches and play dodge ball and I sucked so bad at team sports I was never picked. I felt humiliated and I thought the same thing would happen all over again. Plus I heard the coaches (all male) would line you up and measure your fat with this pincher thing and keep tabs throughout the year. I already had enough complexes about my weight - which was completely normal but still. I'd rather be tortured in Hell.

It was pretty fun to take a course full of college students. And I would be NAUI certified - they help arrange certification for Army Special Forces, Navy SEALs, NASA. Way more sophisticated and intense than PADI. There was a lot of math, physics - we had pressure and depth changes to memorize with clinical consequences at each step. We first tested our skills out in the pool.

After the class was over - it was a night class 6-9 if I remember correctly a couple of days a week - we would all head over to Zack's Place across the street, instructor included. They would order pitchers of beer and I would eat fried snacks and sneak an occasional sip. No one was really watching. We played pool - I got pretty good. I was treated as a pet novelty - this 15 year old kid out past her bedtime. I beamed in their adoration. They were protective of me and kind and I felt safe.

Our open water certification was a camp weekend. We went to Greer's Ferry Lake. I was serious about it - packed all my garb and drove there with a girl friend from class. We were going to camp together - I brought a tent and pitched it near the others. It was still afternoon when we arrived and our open water certification dive wasn't until the next day. I put on my swim suit and found a great perch - a rock overlooking the lake. I sat and basked alone staring at the sky and water until the sun wore me out and I went to bed. Earlier, my friend told me she wouldn't be spending the night with me after all. I told her I would be ok alone.

It was tough getting to sleep because everyone was partying; there was a big bonfire. I wanted none of that because I was nervous. I had pre-test jitters. One girl partied so hard she couldn't take the test the next day (morning campfire drama she had apparently puked all night and was sleeping), but I was ready first thing after a decent night's sleep.

Despite visibility being only two feet, I managed to complete all the tasks required of me in the half day grueling ordeal. I was super proud when my teacher lauded me for successfully completing the navigation course. We had to aim our compass at a flag across the lake, go underwater, and navigate to the flag. I was the only one to surface right in front of the flag. I felt like I won the lottery.

On the drive home I asked my friend what happened to her the night before - she showed up fine for the certification and we were both celebrating our success with loud music and singing. She said, "Remember that guy who wasn't in our class who showed up to take the open water certification with us?" Um, who wouldn't. He was military and super cute - I didn't talk to him but watched him out of the corner of my eye some. Looked like he was in his early 20's. Dark hair, crazy light blue piercing eyes. "Well, he saw you sitting on that rock and came over to ask me who you were. I told him your name, smiled, and said you were 15. His face fell. He said he wanted to invite you back to his cabin but no jailbait for him. I told him he could take me and pretend I was you. It was one of the best nights of my life."

That was one of the first times I can remember feeling beautiful as a young woman.

Greer's Ferry was my first open water dive experience, but I had many more and I revel in the quiet and alien feeling of being deep in the Ocean. It's been over 15 years. I think I'm going to try to get back into it in the next year or so. 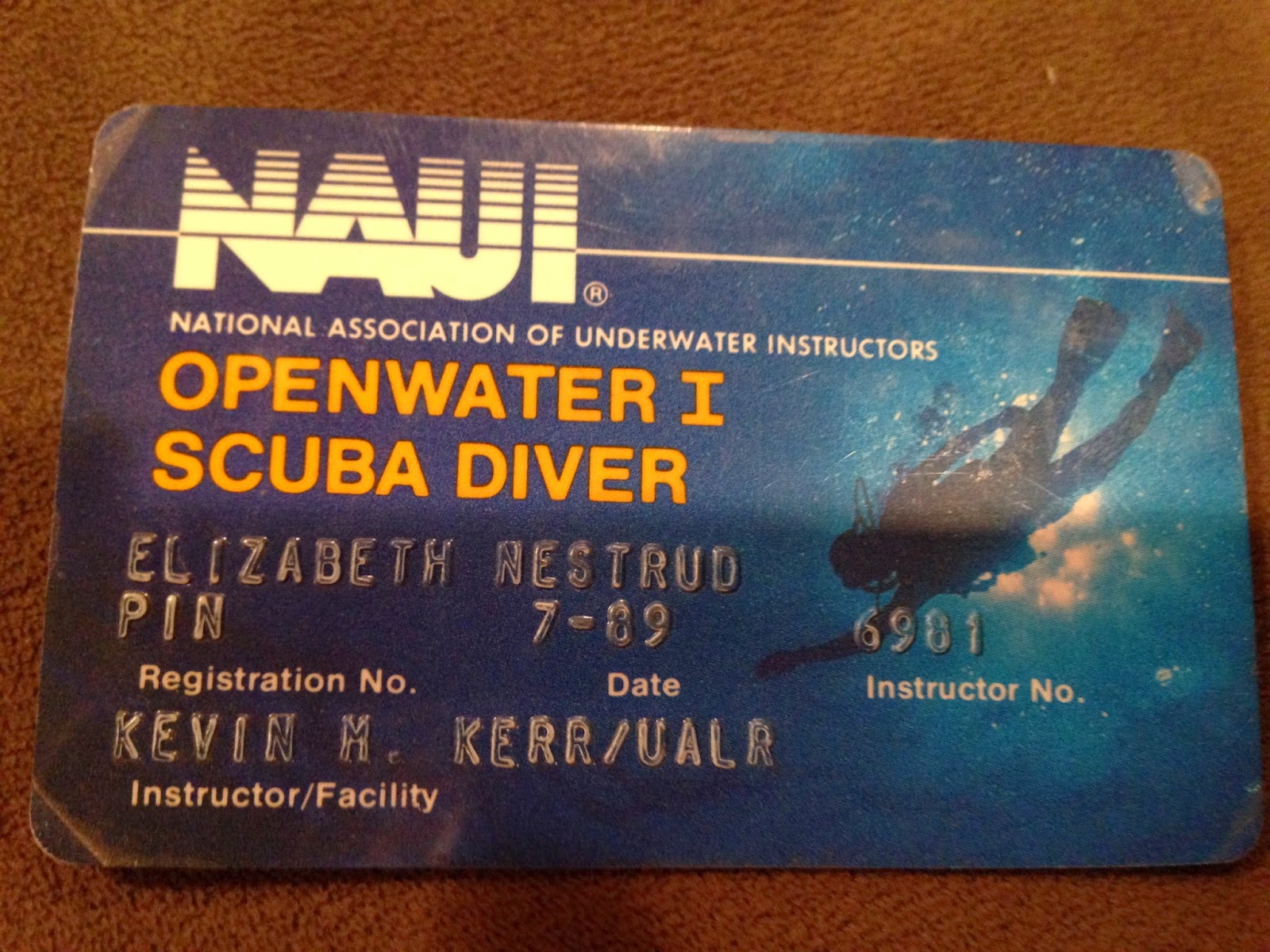 Caption: Open Water Certification Card.  I just took this pic - I still keep it in my wallet like a trophy. Hadn't pulled it out in a few years.

Cool! I scuba dived for the first time in the Caymans, and when I got back, I convinced my mom to let me and my brother get our PADI certification. I live in Calgary (read: inland prairies) so we did our open water dives in a mountain lake.

I don't scuba dive very much anymore because my husband has a history of spontaneous pneumothorax and can't dive, and we spend most of our holiday time climbing so it's rare that we end up somewhere that we can dive and climb. I think the last time I went diving was probably in East Timor in 2008. But I'd like to get back into it too.

I was thinking Calgary was Canada, but had to google to be sure.

My partner's daughter has spontaneous pneumothorax. Scary as hell for them both. Take good care of your husband! My boyfriend and I love to climb we do it all the time on weekends without kids.