Schlitz Beer in a Bottle 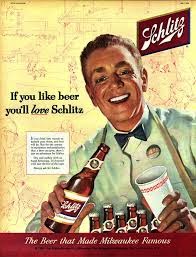 I walked into the doctor's lounge for my afternoon coffee, well, second afternoon coffee before the third on the way out the door to a school meeting at 5:30 - there were storms last night and Jack was up scared and the power went out and I didn't sleep much at all and had to take a cold shower and it's a busy call and a stressful week but who's complaining? Not me. The kids ate with their dad and stepmom tonight so I had a lovely nap after dinner on the couch.

I smiled to see one of my favorite hospitalists on her cell phone. I don't see her very often - she's all over the place, but she was the chief resident of internal medicine when I was a med student so I've known her for a long time. She's incredibly fashionable and always wears the season well - it is summer so she had on a bright pink coral dress and cute kitten heels. I recognized her by her platinum blonde straight hair even though her back was turned.

All of a sudden she said in her loud vivacious high-pitched eternally optimistic voice that fills up any room or corridor she graces, "Do you happen to carry Schlitz Beer in a bottle?"

Normally when a doctor is on the cell phone in a lounge there are hushed tones and serious doctor words being uttered or important commands barked. The three other male doctors in the room, in addition to myself, burst into laughter. She finished her conversation, her voice dwindling in disappointment. Doctor at Table said, as she hung up the phone, "Do they even make that anymore?"

She laughed. "Well, it's really hard to find." I had come around to the mini fridge for a touch of milk to cut the bitterness of my coffee, but not enough for a color change. It's a constant struggle to get this right balance. She turned to me, smiled, and winked. "It's Luke's favorite beer, you know Luke? I'm always trying to find it for him."

I have no idea who Luke is, even though she said his last name. I just nodded and smiled as she dialed another number. She was the center of attention standing there in the middle of the lounge. She said it again, "Do you happen to carry Shlitz Beer in a bottle?" Her audience smiled and Doctor on Couch asked, "Do you have all of the liquor stores in Little Rock on speed dial or what?"

She giggled and pulled the phone away from her ear, whispering conspiratorially in his direction, but loud enough so we could all hear, "No no, this is New Orleans. I've already tried all of Little Rock."

Doctor on Couch got up and walked over to her as she hung up. She was again disappointed, but cheerily so. I thought this girl isn't going to stop even if she has to dial New York City. She and the doc started chatting about a mutual patient and walking out the door. She smiled as she passed me, "Anything for Luke, right?" I wished her good luck. I thought that Luke sure is a lucky guy, whoever he is.