Things Aren't Always As They Seem

Read it, over at MiM.
Posted by Gizabeth Shyder No comments:

Who likes to demonize babies?  Not me.  Not until now.

I was recently on a flight to Cleveland, to visit some old mentors for Winter Break with my kids.  A cute, innocuous mother, petite and blond, sat in front of us on the hour flight.  She carried a baby, maybe five or six months old.  He was smiling, jet black hair and eyes, red streak marks on his cheeks.  I smiled back, and settled into the captain's chair - both kids flanking me.  They slept on the first flight, so were happy and active.  Cecelia read her book, and Jack played games with me on his ipad.

A monstrous stench rose from the seat in front of us.  Not sweet breast milk or formula poop, but infected, nasty poop.  I silently wrinkled my nose and grinned at my kids, communicating without words. "It's OK.  It will go away in a few minutes.  Listen, she's changing the diaper.  Hold your breath."

It happened, the explosive smell followed by the diaper change, I kid you not, at least six more times on the hour flight.  In between, the mom was playing a game with the baby.  Catch the bag of pretzels.  The baby tossed the chewed bag of pretzels over the seat and it landed in my lap.  I tossed it back, smiling hesitantly.  The second time it happened, I didn't smile.  The third time it landed on my son, Jack.  I gave her a nasty look through the slit in the airplane seats.  She laughed musically, tin like, and praised her baby's arm.  "You're going to be a quarterback someday, aren't you?"

I woke up in the middle of the first night with a sore throat so nasty it brought tears to my eyes when I swallowed.  Questioned and focused on the Demon Baby as the culprit.  Found some Aleve and took it to sleep again.  Felt guilty when my pathologist mother friend mentioned over breakfast that her daughter recently got over a cold.  Maybe it wasn't the Demon Baby after all.

Day 2 my son woke up with diarrhea.  I optimistically hoped it was a reaction to the pizza from the night before, and served him breakfast.  After that, all hell broke loose.  Poor Jack was leaking uncontrollably from stem to stern for 18 hours.  Our outing to the zoo was cancelled.  The girls plotted and performed a paper doll fashion show, after the dad took them to sled in the snow.  Meanwhile my mom friend and I did the tenth load of laundry and communicated in amazement as Jack came back from his sixth trip to the bathroom to vomit, cheerily announcing "Well, I think I'm maybe getting better.  That wasn't nearly as bad as the last one," before falling asleep exhausted on the living room couch.  I finally got my Dad to call in a prescription for Phenergen so Jack could A) sleep for more than a half hour without puking and B) hopefully get through the plane ride back to Little Rock the next day.

I know, I know.  I hear there was a nasty GI bug this year, we could have gotten it from anyone.  But I still have flashbacks of the antisocial, red-lipped gummy smile of that Demon Baby, and the infectious havoc he wreaked on our vacation.  And if I ever smell that awful smell on a flight again, or some baby is tossing bug-ridden saliva on me and my children, I will request a change of seats from the steward or stewardess.  Hard lesson learned.

The GI bug lasted two weeks, spreading to me and Cecelia and requiring a couple of sick days for Jack.

That's what Cecelia called our destination.  Crested Butte, CO.  Three single moms and seven kids aged 7-16 in one rent house.  Often joined by a native, albeit familial, family of four.  18 hour drive (36 if you count the way back).  If that sounds like a version of hell, let me assure you that it wasn't.  Truly restorative.

It was my first Spring Break since B.C. - before Cecelia.  She's 10.  I'm slowly climbing the vacation priority ladder - I'll fall back to the bottom in a couple of years.  I was determined to make the most of it.

Sure it had it's moments.  Back strain carrying boxes of snacks and Vitamin Water in the house.  Picking locks on bedroom doors.  Getting caught in a snowstorm at the Sand Dunes National Park.  Losing snow boots (7 year old) playing in snow that acted like quicksand.  But they were eclipsed by moments like this. 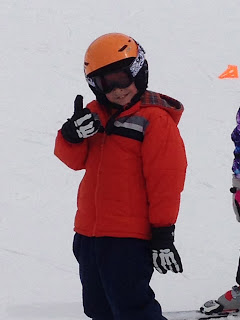 "Mom, I am in Heaven.  This is my best vacation ever.  On my last day I was doing jumps!" 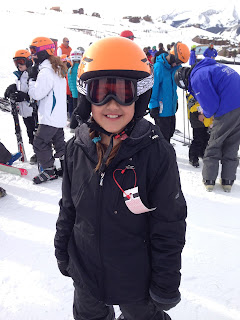 "I thought I would die when I moved to Level 3 and I got a new instructor.  Mike was the best, but Cass is so cool!  He uses words like 'Smooth' and 'Dude'.  He taught me how to turn." 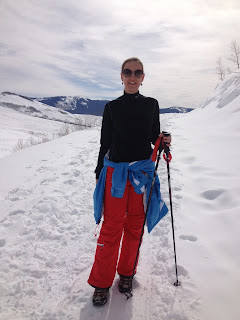 I learned how to cross country ski, snowshoe, and hike snow trails.  This was right before landing hip deep in a hidden rut.  Scary and fun is my cup of tea.

We pranked.  We cooked.  We cleaned.  We baked.  We drank rivers of coffee.  We watched the biggest snowfall of the year on our last day, but we got out of the mountains safely.

I want to do it again next year.  I am on call this week, but I am more relaxed, despite being paged at the crack of dawn for an early appendix frozen, than ever.

I hope everyone had as fantastic a Spring Break as my first in over 10 years.  Thanks to Katie, Becky, Noah, Craig, Tapp, Wesley, Caleb, Bridget, Hadley, Corbin, Cecelia, and Jack.  What a wonderful whirlwind of a week.
Posted by Gizabeth Shyder 2 comments:

How is it that I can hear the drilling of the brick hospital facade like it is occurring in my own head?  The mind-numbing, irritating cacophony irks me to no end.

When I complained about it a few months ago the hospital contractors shifted the work to the weekends.  But apparently this work cannot be shifted to the weekends.  They have told me I can call on them anytime to get an hour break or so.  This seems like too much work for me, on top of everything I already do.

So after a few days of stewing and cursing and wondering if the drillers would drill any less if it was THEIR prostate (cancer) I was looking at and assessing for margins (apex, base, peripheral) and seminal vesicle involvement and perineural invasion then maybe they would they STOP ALREADY, I settled.  Into my new life.

I bought those spongy earplugs at the hospital gift shop.  I use them frequently.  Gazing into the microscope all day is a little like plunging into the ocean to scuba dive (love scuba diving) but with earplugs it is even more so.  I am truly in my own little world.  Much to the chagrin of the endless barrage of techs and secretaries and doctors with consults (asking or returning) knocking at my door (I CAN'T HEAR YOU!).  Plusses and minuses.  The earplugs deaden the noise, but it does not go away.  I hear it in my sleep.

They tell me this is a 4 year project.  Oh joy!
Posted by Gizabeth Shyder 2 comments:

My Darling is a Decade

My oh my how time flies. 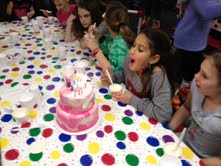 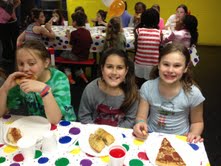 That's her in the middle with the Love Cleveland Ohio sweatshirt.

I remember when I was dreaming fondly of our future relationship as she was swimming around in my belly.  Now she's skating around the roller rink like a queen.  And I'm living the dream.

Happy 10th, Cecelia.  If I barely missed your real birthday with this post, March 10th, blame it on Spring Forward please.  It's officially three minutes after midnight.
Posted by Gizabeth Shyder No comments:

A Dark Day in Arkansas

We elected these people, that chose to ignore citizen turnout.  Ignored their voices.

Our legislature is overpowered by Koch-heads.

We voted these people in.

Only we have the power to change this Draconian, judgmental, controlling legislature.

I have, and always will, vote for control of my body.  We all have the inalienable right to control our own bodies.  Yet somehow, some people think that it is in all our best interests to legislate this away from us.

From our darkest days, we will hopefully find a pinhole of light.
Posted by Gizabeth Shyder 2 comments:

Over at MiM . . .
Posted by Gizabeth Shyder No comments: