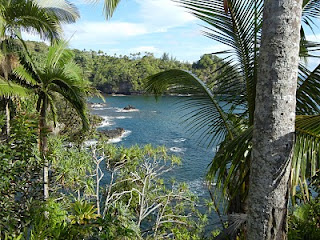 Whew! I finally found my attachment so I could upload pics from my new Nikon.
Here's a fabulous secret - no one in Hawaii knows about this adventurous lava tube spelunking tour. After arriving in Hawaii and finally unpacking at 3:30 a.m. Little Rock time, I had a couple of glasses of wine in the lounge and slept soundly before my trek to Kilauea in the morning. Driving down the highway in my rental Chevy Malibu listening to island tunes on one of three local radio stations was liberating. I was a little early (as usual) for the 11:00 tour, so I stopped along the way to take in scenes like the one on the left. Breathtaking, right?
I was a little worried about finding the tour base, but arrived without trouble 15 minutes early. Plenty of time to chat with the movie star family that was responsible for leading the tour - tall, dark, handsome Hawaiians - a father, two sons, and a daughter. Mark, Mark, Hector *swoon,* and Selena. Since the Philadelphian manager of a team of financial advisers and his wife were hopelessly lost, eventually requiring Selena to find them in her pickup truck and lead them to the site, I got to know the locals well. I was especially excited when Hector volunteered to help me plan the rest of my day - pulled out my map and pulled up a chair (close) to plot my quest for lava.
Hector left to lead the basic tour, leaving the two Marks, the other couple, and I to gear up in our hardhats, hand-held giant flashlights, gloves, and knee pads. We hiked to the entrance of the cave, and climbed down a forty foot ladder to enter. 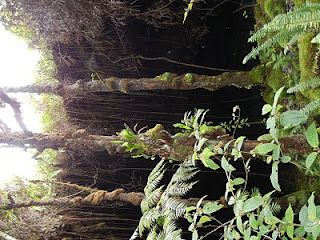 Here is what the entrance looked like (sideways). Taking pictures was pretty difficult with the gloves and holding the flashlight, but I got a few. I was surprised at how strenuous the tour was. Within about 15 minutes of the three hour trek my jeans and t-shirt were soaked in sweat. It seems that in the lava tubes, the roof caves in periodically, creating a mountain of rubble that requires surmounting prior to getting to the next leg of the tour. At times we would be climbing through mountains in caverns, at others we would be shimmying through small crevices.
The most surprising thing about the lava tubes was the color of the formations. Being from Arkansas, I am used to cavern delicacies - namely soda straws, stalactites, and stalagmites - looking mostly brown and yellow in the light from the installed floodlights. Here, there were no installed floodlights. In fact, I'm not sure our tour guides had been into the caverns more than a couple of times. They kept saying things like, "Isn't this cool?" and "Let's go here, I don't think I've ever been here before." I became slightly nervous but was reassured when the dad told me that no roofs had caved in during the last big earthquake, despite the fact that half of our flashlights were dead and abandoned within an hour and the dad and son were arguing over what types of batteries they should have bought.
Here in the lava tubes, everything was gunmetal grey and sparkly silver. A wonderland of color. Mr. financial advisor manager said, "This looks like a great place for an ATV chase scene in a movie." 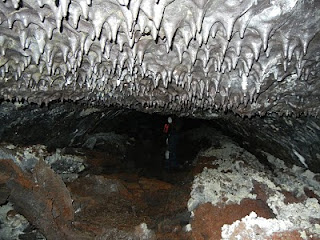 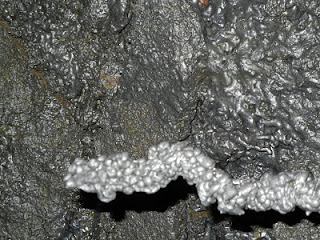 I've been scuba diving, spelunking, and mountain climbing, but this was like nothing I've ever seen before.
I met a ton of pathologists on my trip - from L.A., Virginia, etc. Even the one who has been attending this conference for 17 years had never heard of these lava tubes. My pal from L.A. actively sought the tour out with the multitudes of tour guides in the lobby, frustratingly to no avail. She told me she finally learned that they are keeping it a secret so it remains pristine. The other couple found out about it in the same guide as me - Fodor's.
Needless to say, I felt special for having the chance to experience the surroundings and micro climate. And sore as hell the next day during lectures. More about my afternoon quest for lava in future installments.
Posted by Gizabeth Shyder

Very cool! I don't have the energy for something like that, but nice to experience it vicariously.