That is what you get to do, when you leave your old life behind. Start over! When I go to Hawaii for a CME (continuing medical education) conference in a couple of weeks, that's the plan.
I'm staying at a resort on the best beach on the Big Island, right on South Kohala coast, which is where the conference is located. But the wonderful thing about this conference is that it only lasts 1/2 a day each day, leaving plenty of time for exploration.
I booked two adventure tours earlier this week. Both require hiking shoes, jeans, warm pullovers, parkas, and gloves. I know you're thinking, "Didn't she say she was going to Hawaii?" And yes, I'm bringing some bathing suits for lounging and snorkeling, but the adventures require warm clothing.
First off, Kilaueau Caverns of Fire. I was so excited, sitting at the GI office scope the other day, when my phone rang. I answered, "Hello?" and they said, "This is the Caverns of Fire, returning your phone call." How cool is it to get a phone call from the Caverns of Fire? They consist of a cavernous basement underneath the world's largest active volcano, and if you are feeling adventurous, like me, you can book the three hour spelunking tour, exploring the caverns and lava tubes with a miners hat. I didn't even know that lava tubes existed (thanks, Fodor's)! In addition to conventional cave formations, lava tubes boast lavacicles, pictured above. I've heard of stalactites and stalagmites - both of which I will also see in the 500-700 year old lava tubes and caverns, but never lavacicles. Spell check doesn't even recognize that.
When I was talking to the guide on the phone, he recommended the lava flow nearby at nighttime. I inquired as to what it was, and after he learned that I would be two hours from my hotel, he said, "You may not want to do the lava flow - you won't get in until after midnight." The lava flow is an area where active lava flows into the ocean, best observed at sunset. I agreed with him sagely and responsibly then hung up the phone and shook my head. 7 a.m meeting or no, when the hell am I ever going to get a chance again to see lava flowing into the ocean? It's kind of a no brainer. It's been a while, but I've been known to party all night, and I'm thinking lava flowing into the ocean is a much better reason to stay up late than drinking too many beers. I'll be loading up on Kona coffee for that experience. 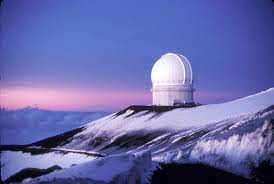 The second adventure involves traveling with a group to the top of the "white mountain," Mauna Key, where snow falls year round. Temperatures average 30 degrees, and it is often windy. The mountain houses the world's largest astronomical observatory, reputedly the best place on Earth for viewing the night sky. Tough to get to by rental car, so I booked a tour that provides travel, hot cocoa, dinner, gloves, and jackets. Sunset on the summit followed by a trip to the observatory, which houses fancy telescopes that are hands off for the lay public. There is also an amateur room with dummy scopes and nightly stargazing sessions. The unique atmosphere promises clear skies year round to see galaxies at the edge of the universe. Space geek utopia, I'm thinking.
So in addition to boning up on breast and thyroid pathology (I'll search for hot science guys and cabana boys in my copious spare time), I'm plotting a reinvention. Promised my kids I'd bring them back some lava. Shouldn't be too hard to keep that one.
Posted by Gizabeth Shyder

Astrophysics geeks can be hot if you allow them to be. You'll have to take control though.... =oP

OMG you are going to have the greatest time! Those excursions sound amazing! Please post as many pics and details as you possibly can, so that I may live vicariously through you! JEALOUS but in a supportive happy way.

Sounds great! I've been lucky enough to see the lava flowing into the ocean on the Big Island and it is definitely worth staying up to midnight!

As far as bringing some lava back for the kids, just beware of Pele's Curse: http://en.wikipedia.org/wiki/Pele's_Curse

Envious of your trip and adventure tours. Have fun!

I am sooooo jealous! We went to Hawaii several years ago, and it remains our favorite trip ever. My son LOVED it!!

Seriously, if I weren't in medicine, I would be a volcanologist. If you have time, take a helicopter tour of Kilauea. Spectacular. You can also hike across an active volcano at Kilauea Iki.

Have a wonderful time! You deserve it! (Must post some photos when you return...)

Give my regards to Pele.

DC - I'll have you on standby for dating/hook-up advice, I hope!

Maren - thanks for warning. That reminded me of an old Brady Bunch two parter episode with cursed necklaces and tarantulas. I will heed the warning and pay for any gifts to kids - even if I have to lie to them and pretend something is lava.

gcs15 - I was at brunch with a friend today who also raved about the helicopter tours - I'm going to look for a sunset lava flow one so maybe I can get home before midnight after all!

That sounds like a very exciting trip! Enjoy yourself!