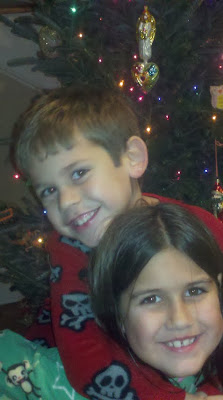 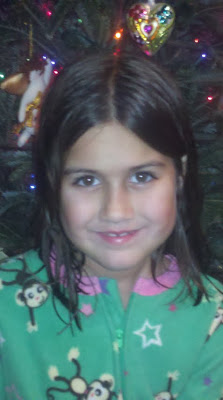 I just finished wrapping all my adult gifts - insert gift card into sack, fluff tissue paper - and am waiting for my night owl Cecelia to fall asleep. She is singing her favorite doll Pippi to sleep, and I hope she finishes soon so the "elves" can start wrapping kid gifts. I've got a huge buzz off of one glass of Cabernet - it's been a while so I'd better slow down if I'm going to outlast the nocturnal one.
Got my Christmas cards in the mail yesterday and addressed for 2 1/2 hours last night - oops! I only got 100 this year and for the first time in about five years I ran out. Oh well. Here are some pics that made the cut. Cecelia dubbed Jack the candy cane alien in the last one.
Despite a busy work week, and rolling into a big week of call starting Monday night, it's been a great holiday so far. One of the keys to surviving a week without kids over the holidays (next week for me), I think, is a batch of books from B&N, half of which I've already read. I plan to post a list with one word book reviews when I'm done, hopefully by next weekend. And lots of exercise, to balance out the already plentiful over indulgences (red velvet brownies with homemade cream cheese icing, gingerbread cookies, annual giant sack of homemade treats from the billing office, boxes of chocolates from friends, Dad's homemade toffee, peppermint bark, etc. etc.).
I had a blast today gifting my partners with soap. It's not just any soap, it looks like bacteria growing on a petri dish. My brother and his wife Effie sent some to me for my birthday, and if it wasn't for those two dishes of bacteria soap I would not have been very clean for the first week or so after my move in September - it took me about a week to locate the master bathroom box. I attached a typed greeting assuring my partners that if they received Klebsiella pneumonia, it meant that I thought they drank too much at the Christmas party last Friday (Klebsiella is the bug that alcoholics tend to get when they aspirate). Dr. Woods got E.Coli (or was it Salmonella?) with a special treatment - after all, I am the Director of the Micro lab so I have special micro treatment powers. He won't be needing his rocket blaster enema for a while (hee hee). My partner Michelle was ecstatic to receive Pseudomonas aeruginosa, which carries its real life characteristic "grape-like" smell. "I was hoping to get Pseudomonas, and I was so happy when I did!" God, we are such nerds. The transcriptionists were not nearly as excited about the soap as we all were ("Um, so what?). Here is an example - the E. Coli smells like honey - one of my favorites! You can find it on Etsy - just google cleaner science. They even have glow in the dark bacterial soap. No, I was not paid for this, I just think they are really cool. They are so life-like - as one partner pointed out, there are even divots in the agar simulating inoculation by the loop (he would use golf terminology). 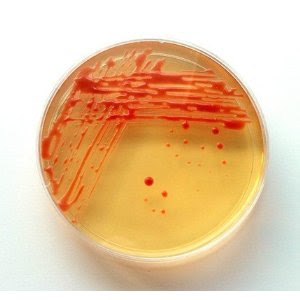 Those that I worried would not appreciate the petri dish soap got food - sesame almond and rosemary snack mixes. I made sure to stick around until flow cytometry opened theirs so I could have a big handful. The buzz I got off running around gifting today topped the one I am currently experiencing from my glass of Cabernet. I love Christmas!
Hope you are having a fabulous holiday.
Posted by Gizabeth Shyder

Now, how did I know that YOU would be the kind of person who would actually gift that crazy soap?

Merry whatever to you and yours.

Luckily, none of my partners follow blogs, so Dr. Grumpy didn't spoil my surprise.

I love those soaps!!

I also love these: http://www.etsy.com/listing/60616710/petri-dish-earrings?ref=pr_shop

For some reason, I nicknamed my SIL/best friend Petri Dish, so I'm going to have to buy them for her soon. LOL.

Those are awesome! Thanks for sharing the link.