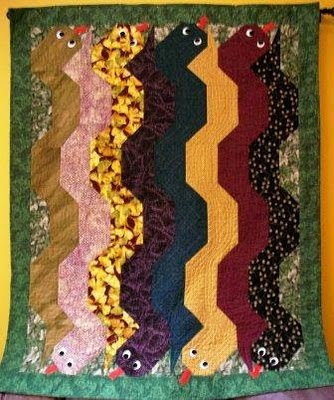 At 8:00 a.m. Saturday morning, Ramona and her husband met me and Sicily and John at my mom's house. Sicily and John were gifted handmade quilts by Ramona - his an amazing snake quilt and hers a beautiful pattern with rainbow quilted squares. Both were so enthralled they got lost in their own version of motion ecstasy - it looked like they were breakdancing on their quilts for a few minutes. Mom took Ramona and her husband Brett on a tour of the house while Sicily, John and I studied the patterns, chose our favorite snakes, and played impromptu games devised by Sicily and John involving the quilts.
Ramona, Brett and I headed to the Morgan McDonald's for coffee and breakfast, excited about our well planned day. We were going to hit Greenwood at 11:00 to see the medical exhibit at the Old Jail Museum, then lunch at wineries in nearby Altus, with time for flea markets before heading back - I had to get the kids to an Irish Catholic wedding extravaganza by 7:00 p.m.
It was tough to listen to the music - we were all excitedly telling stories and getting to know each other. We were congratulating ourselves by making it to Greenwood early - around 10:38 a.m. - but were a little confused that Google Maps was leading us down dirt roads with small farmhouses - there was nary a medical museum in sight. Brett, king of navigation, said, "Why don't we head back to that fire station and ask for directions?"
Ramona said, "Where did you see a fire station?"
I rushed in, "Maybe it wasn't a fire station? But there was definitely someone that looked like a firefighter. I saw him."
We eventually ran across what looked like a farm equipment supply warehouse and Brett went in for directions. He came out laughing.
"We are in the Greenwood Community. Greenwood, AR is another 45 minutes or so toward Fort Smith."
We all commiserated in the flaws of Google Maps, and Brett pulled out a good old atlas to help him navigate the back roads to get to Greenwood. At one point we thought we were close, but we came to an impasse at the Mulberry River. We stopped to ask some fishermen for directions, and despite the fact that the man drunkenly staggered to the window with fire-red eyes that suggested we would get no help at all, he was able to listen and give advice.
"You're on the wrong side of the River. Yes, Greenwood is right over there, but you need to go to Ozark or Fort Smith to cross the Arkansas River."
Brett pulled out his redneck drawl - his ancestors were in the Civil War and he is a big Civil War history buff - and answered, "Oh! So this isn't just a fold in the map, it is the Arkansas River. Well, I guess this truck can do a lot of things but it won't float us across."
As we headed toward Fort Smith, I joked that we were going to Greenwood by way of Oklahoma. I loved the fact that even though Ramona was in charge of Google Maps (and that failed), and Brett was in charge of the atlas (and that wasn't perfect, either), both were entirely supportive of each other - there were no blame games or tense moments, just easy jokes. It reinforced the stories they told on the trip and the sentences that they completed for each other. Setting stories straight without judgement or correction. Rushing in to reassure at any sign of insecurity. This was a great marriage.
When we did end up in Oklahoma briefly, due to the lack of a sign going one direction on the highway, Brett laughed. "You are a prophecy, Gizabeth. You should buy a lottery ticket."
I said, "Ya'll were doomed, inviting me on this trip. I am the queen of getting lost. My mere presence has derailed your perfect navigational skills (Ramona had been bragging). I take all the blame."
We finally entered Greenwood close to 1:00 p.m., starving. I bought corn nuts, almonds, and pretzels at a gas station so we would be able to enjoy the museum before lunch without our stomachs growling too much. We had long given up the idea of winery lunches and flea markets. 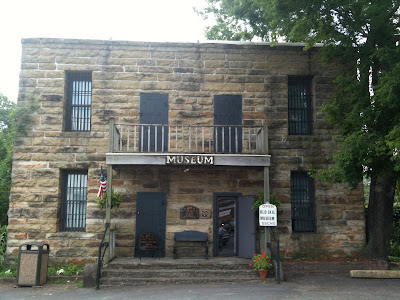 The Old Jail Museum was enchanting - rich Southern history. But Ramona and I were a little confused when we had seen almost all of the inside and the only medical history consisted of a few old books in glass bookcases. Brett asked the two 80 plus year old female tour guides, "Don't you have a medical display?" He had to talk loud, they were both hard of hearing.
They looked at each other, confused. "Wasn't that last year? Or was it the year before?"
It was time limited, and we missed it. I said, "Don't worry Ramona! We'll just get the rest of the tour. The history is fascinating. We'll call ahead, next time." She worried, "It didn't give a time frame, in the research I did at UAMS. I hope no one has read my blog and tried to find it." I smiled. "Do you really think anyone who reads your blog (she has many international followers) has tried to find this place in the last two months? You can correct it tomorrow."
I got enthralled with two headstones in the backyard and took many pics. One was the oldest known headstone in Sebastian County - the two year old died on August 22, 1859. The engravings were difficult to read - they had been mostly worn away by time. I sat there for a long time getting lost looking at it and reading the article next to it, and finally woke up hearing Ramona say, "She's over here, Brett! I found her. She found something she really likes. She's by the gravestones." 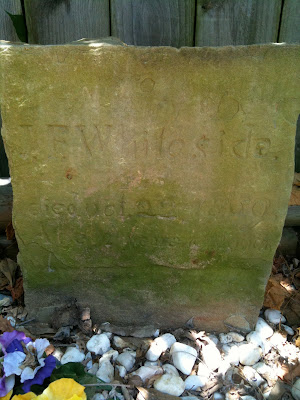 We toured the dog-trot log cabin, the old Redwine Schoolhouse, and the shed full of farm equipment. I listened to a story told by the guide.
"My daddy was the night policeman. He'd round up the troublesome drunks at the bars, and haul them into the jail. Then he'd stop by their houses and tell their wives he was holding them overnight, so they wouldn't expect them until the morning. There was this one vagrant who decided to stay - a lot of the local women traded cooking for the prisoners and the food was mighty good. My daddy got real mad and went to the county, but he couldn't get anyone to help him get rid of the guy. Finally, he had an idea. My daddy was a big guy. He disguised himself as a prisoner one night, and I never heard exactly what he did, but he did something to that man, that night. Or acted like he was gonna do something. And that man ran away from our jail all the way to Booneville. We never saw him again."
We asked the women guides the best place to eat in Greenwood, and they pointed us in the right direction toward The Bulldog, where they use local meat and cut it themselves for their burgers. The atmosphere was comical, but the meat and the chocolate peanut butter pie, homemade by the matriarch who was enjoying weekend-long festivities for her 75th birthday, were amazing. 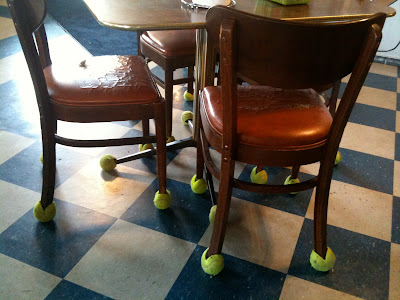 On the way back I asked them to pop in Lucinda Williams' Little Honey and laid down in the back seat while Ramona read books on her iphone and Brett navigated us safely home. I had to rest up - was headed to a big Irish Catholic wedding downtown with the kids where we danced with nurses, doctors, and Caitlin until 11:00 p.m., despite my friend Katie and I's plan to rally the kids by 9:30. When they dropped me off at mom and dad's, I hugged them and Brett talked about our next trip. "Should we do Crowley's Ridge and Forrest City?" Ramona and I looked at each other and smiled. I said, "Maybe we should head to Benton, next. Call ahead, first, make sure we aren't 6 months late. Make it a half day trip." Ramona agreed. Baby steps. We've got lots of time to make our rounds around the state. It might take a few months, but I'm determined to see some good medical artifacts (and I think they are, too). Despite our complete bust, we had an amazing time. I can't wait to plan the next one. You can see Ramona's version of the experience - Egg On My Face. She also has lots of cool photos. I am exhausted of uploading the few I have managed to insert between the text I wrote last night and have to get to work. More computer voodoo above. Crazy kids burning up the dance floor below. 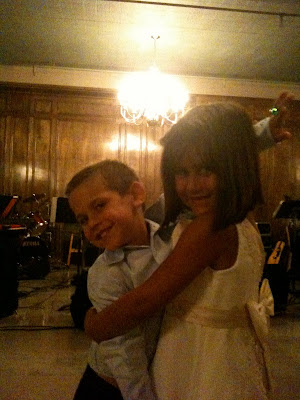 It was a great day, wasn't it!

We've had people DIE around here because they followed the directions of Google Maps or some GPS system. They give the shortest route as the crow flies, but never takes into account they are often unpopulated back roads. Every winter we get stories of ppl who freeze to death on some ranger rds in the area. Sad.

Wow. I didn't know people died from Google Maps. Wonder if there are any lawsuits out there. We briefly considered knocking on the door of a farmhouse for directions. Brett was a door to door insurance salesman in college, and had been chased with a shotgun once. So we went back to the fire/farm equipment house instead. So I guess you could say our lives were hypothetically threatened as a result of Google Maps.

Your kids are ADORABLE! We went to a wedding reception recently and KayTar had a blast. She is TOTALLY a party person. She was in ketosis the next day from all that fun, but oh well. BubTar opted to spend the night with a friend instead of going, he's my shy guy and large gatherings are not his scene.

I always, always get lost...I got a GPS for Christmas and it has changed my life.

Sounds like you guys had fun, regardless of being lost or missing the exhibit! Sometimes it is the people that make a day great.

The people make the plans whether they work out or not.

I am soooooo jealous that you get to spend time with Ramona! Hey, come visit us in England; see our 1000 year old castle. If you time it right, you even get to see real knights ... :)

She is a great person to spend time with! I love the idea of going to England to visit 1000 year old castles - definitely will file that one away for the future (when divorce is settled and life gets normal again - wait, normal life? Maybe I'll have to just settle for a little lack of insanity).