I really need to be paying bills, or worrying about the credit card bill that I lost (but it's not due until April so I can figure out how to do that online this week), or getting to some other items on my long, never-ending to-do list. But I'd rather draft this blog, and add pics tomorrow from my laptop at work, where the Internet connection is working.

I'm excited because it is Spring Break this week - and I've got lots of activities planned for the kids while I am at work. For me it means no swim practice, no lunches for school, no cooking breakfast and getting kids ready in the a.m. - I can just worry about getting me to and from work and concentrating on call.

Saturday was a gorgeous day in Jonesboro - cloudy and sunny - mid-sixties. Perfect for a day at my friend Alyssa's house. You might think that since I am a fancy doctor, we had lots of fancy doctor events to attend at the Country Club. But you would be wrong. I think the fanciest doctors are the ones that don't try to be fancy. Alyssa fits into this category perfectly.

When Sicily and I arrived Saturday morning, we could see Ainsley, their three-year old, hopping up and down with excitement through the window. I had to warn Sicily not to jump out of the car while it was still moving. The kid's excitement was infectious.

First we hit the new swing set. It had a rock climbing wall that led to a castle turret. I even tried that.

Then we headed to lunch over at an organic college lunch bistro. The food was amazing, and we ate on the front porch in the sun. I had a grilled wrap filled with spinach, melted swiss cheese, a cream cheese and veggie mixture, and sprouts. For dessert, Alyssa and I had bites of her daughter's leftover peanut butter, apple, and honey sandwich (it was a little messy and intimidating for her - plus she is just so enthralled with Sicily's antics she forgets to eat).

After lunch, Sicily and I enjoyed quiet time on a blanket in the backyard with their dog, Miles, while everyone else was napping in the house. Watching the clouds roll overhead. Sicily got bored, and started an art project in the house, eventually enrolling all of us. Crayons, Easter eggs, and Pandora. I really wanted to get back in the sun (I'm such a Leo), so I went outside in between clouds to collect clovers and small flowers to add to the art. Here are the final products. 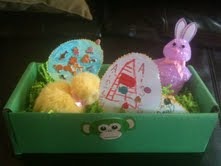 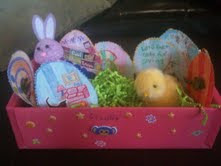 I'm proud of the girl's (and our!) work. Ainsley instituted the Funky Monkey band-aid club, which we all joined, even though none of us had boo-boos. 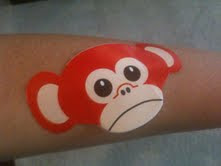 As the evening progressed, Alyssa prepared her famously fabulous pizza dough while her husband Chris chopped tomatoes, basil, and mushrooms. I pulled out a bottle of Frontier Red. He said,

"Oh! Did you buy that in honor of Fess Parker? He died this week."

I wish I was that cool. I had to ask who Fess Parker was. I fell in love with Frontier Red when I was looking for a cheap screw-top bottle on the way to Conway last month, so I wouldn't have to buy a bottle opener.

Chris is that cool. He has a vast, international beer collection (even has some home brew), ran his first marathon in Little Rock recently, and is a bit of a loner. I like that. Don't try the Grand Cru. Thumbs down.

After dinner we played in the sandbox. Sat on the swing set. Generated some good, bath-worthy grit. 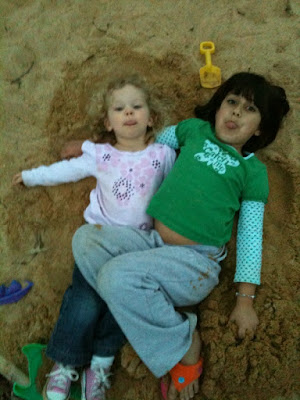 After Alyssa read books and we winded the kids down, I made a bunch of CD's for Alyssa and Chris until the juice ran out of my computer (I forgot the charger). Chris headed to bed - he had a 12 hour shift Sunday. Alyssa and I stayed up late drinking wine and talking about the past.

It is so great, when you are playing detective in your own story, to have a supportive friend to bounce stuff off of. She was there. The more we talk, the more I put things together. The more I hurt. The more I grow. She talked about her past too, and although I was the maid of honor in her wedding (pinnacle position!), I learned more about her, and we grew closer.

The next morning, Sicily woke up writhing in agony and tears over a bad dream, and worry over leaving town and the wonderful weekend. I empathized with her, but couldn't console her very well. She's too reactive with me, as a Mom. Ainsley took over. Cheered her up while Alyssa and I cooked pancakes.

I can't wait to plan the next trip to Jonesboro.
I hope one day Ainsley can be there as much for Sicily as Alyssa is for me. 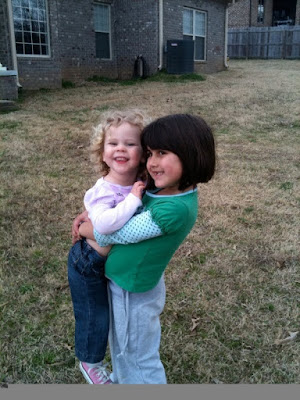 We loved having you visit! And I enjoyed reading about the weekend from your perspective. =) Can't wait to tell Chris you blogged that he's "cool". ;)