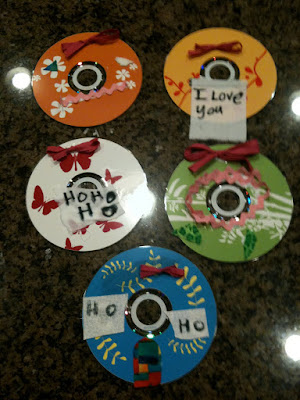 I opened up Sicily's glittery heart folder from her pink backpack last week, and saw a memo from the teacher.
"Please bring 15 gifts on December 15th to share with the classmates. Examples in the past have been Golden Books, stickers, etc. Do not spend a lot of money."
I cringed. 15 gifts? To go in a stocking? My child was going to come home with 15 gifts before Christmas break? Whew.
I decided to embrace the spirit of the endeavor. I would not run to Target at 9:00 at night to buy 15 plastic objects made by children in China. This was going to be about Sicily. So the next day, we were running through ideas.
"Here are the examples, Sicily -- what do you think?"
"Well, mom, we could go to Michael's and get some of those wind-up toys we got for the Halloween party."
"What about a CD?"
"Yeah! I'll make a song list right now."
She made one, and I stuffed it in my purse so I wouldn't lose it. I was going to have to buy a couple of the Polar Express songs on itunes, but oh well. Still a pretty cost-saving idea - one that she could make hers. One night last week on the way home from work, I stopped at Office Depot and found some CDs with great art - they weren't there the last time I picked up a big batch. I was so excited. I couldn't wait to show them to her. I was a little stressed about finding the time to make and label the CD's, but I was off the next week, so I figured I would work it in somehow.
Last night in the car on the way home from my mom's, Sicily was vying for attention over the music and her brother.
"Mom, listen to me. I have an idea. Do you have pictures of my classmates? Like in the yearbook? We could cut them out and put them on the CD's."
"No, Sicily, that won't work, if we glue them or tape them on the CD's it might mess them up when they put them in the CD player. We could maybe put them on the cover - the one we label. You can decorate them."
She answered emphatically. "No, mom, that's not my idea. There's not going to be music anymore."
I thought the music idea was so good, I initially tried to dissuade her. She had other ideas.
"I want to make the CD's Christmas ornaments, for their tree. We can get some great ribbon to tie through the middle. I want to decorate them with my classmate's pictures."
What a fabulous idea. And less work, for me. "I'll stop by my office tomorrow and check for pictures in the directory."
Unfortunately, there weren't any pictures in the directory. When I broke the news to Sicily today in the afternoon carpool line, she wasn't dissuaded. "It's OK. I have those wonderful scraps, from your friend Ramona. I think I know where some pink ribbon is. We have lots of stuff around the house. I'll make it work."
I had a long lunch Thursday with a blogging friend, Ramona Bates. She is a plastic surgeon in Little Rock, and we met through a medical bloggers in Arkansas article. I've been following her blog for a few months, and we finally found the time to meet in person. I was incredibly touched that she brought quilting scraps for Sicily - I had mentioned in a comment a couple of months back that Sicily's old school liked to use quilting scraps for sewing buttons, when she wondered on her blog what to do with her quilting scraps. Her blog has the smart title Suture For A Living, and she often reviews articles and books and talks about her hobbies. She is the person that suggested I post over at Mothers in Medicine, so I am incredibly thankful to her for plugging me into this community. Her blog is worth checking out. If you like to read about reviews of nail bed injuries over your morning coffee, or 30 pound breast tumors (I thought only ovarian tumors got that big!), then you'll have fun.
Tonight Sicily grabbed her bag of quilting scraps, (my goodness she was like a kid in a candy store when she received them - so incredibly grateful and excited - "Who do you know that gave me such a great gift?? Can I meet her someday? Can we take some to Nana's house so I can sew with her on my Nana days?"), some pink ribbon, and went to town. The picture above shows some of the results. I am so incredibly proud of her creativity and work.
I loved meeting Ramona. We cut to the chase, face to face, and unloaded about business practices, dreams, regrets, and family. She's an amazing person.
Posted by Gizabeth Shyder

I'm thrilled that your daughter was so happy to get the scraps. I'll have to save more for her. :)

Aren't they fabulous? She made 15 of them - we worked all morning. I was her "sous chef" - tying bows and cutting out shapes from your bag. Can you believe I pitched a Michael's trip this morning? "Mom, we don't need Michael's. We've got Ramona's scraps."