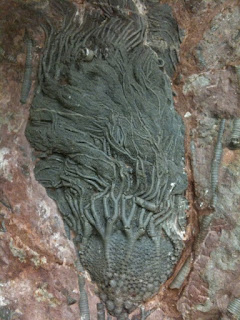 I can't wait to call someone a crinoid now!

Just read your blog about our weekend. Wanted to let you know again, that under no circumstances should half and half be chunky. And, it was your scientific approach to evaluating all the half and half that made me think you were just as much of a dork as I am. By the way, I still have my rock collection that I started sometime under the age of 10 =)

I love our dorkiness! Can't wait for the next weekend. By the way, that Christmas light glass block has lost all its decorations and looks really cool and artsy now.