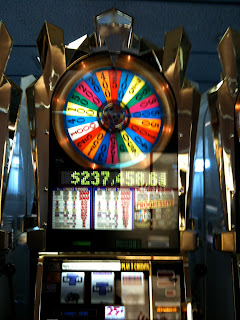 Not a long postponement. But I can't sleep. So here's to San Fran. But first, Vegas. I went to Vegas for the first time on the way to San Francisco, and learned that you don't have to go far, even leave the airport, to experience the mood. These were everywhere. I didn't engage, but had fun watching others pour their money down the drain.
Here's Madeleine. Her mom and dad, the infamous pathology duo who are taking the academic scene by storm at Stanford, picked me up from the airport, with their three kids. We went to dinner at a fabulous Mexican organic (every thing's organic in California) kitchen. I tasted Amy's tamale and quesadilla, and Jesse's carnitas. Somehow, I couldn't get anyone to taste my squid and rock cod ceviche. Don't know why - it was fabulous. Maddie, their eldest, turned her nose up at my meal, but here she is enjoying her chocolate and cinnamon Popsicle. 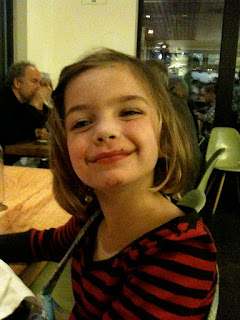 They dropped me off downtown at The Palace Hotel, an elegant Grand Dame of a hotel. No coffee machine in the room, though. My view, each morning, on the way to the workout room, was of a grand hallway with regal carpets and endless closed wooden doors. Kinda spooky. Redrum. The rooms were nice. 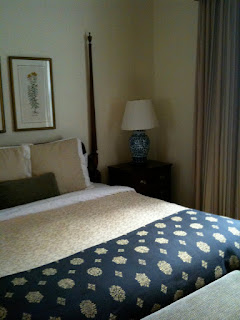 I mostly hung out with this one guy - he was amazing. I couldn't tell you the name of a single pathologist at the conference - there were around a hundred, but I didn't meet a one. Me and this guy, though, we hung out at breakfast, lunch, and dinner. He is a great storyteller, and well traveled. A bit of a drama queen, with a flair for a punchy ending. He likes the word interminable, and used it so much, I began to look for it in every story. Luckily for my husband, he is dead. W. Somerset Maugham. I bought his short story collection a while ago, on a recommendation from a novelist I admired but now can't remember. I powered through 800 plus pages in the course of the trip. It is fun going to fancy restaurants solo, armed with a burgundy hardcover book. It's like a flag, "I am dining alone." We enjoyed sashimi tuna, foie gras, panna cotta, etc.
At breakfast each morning before the conference, there was a veritable feast. Pastries and bagels with so many accouterments, I took to putting a little of each on my plate, to taste. My favorite was a cream cheese laced with blobs of pink jelly, that I first thought was grapefruit. A quick sample proved me wrong. Smoked salmon. Wow. Good thing I was running each morning.
The lecturers were really good - if you are into pathology. One guy, a Northerner with silver hair, liked to tell jokes. I was impressed with his fancy suit and his seemingly winning battle with middle-aged paunch. He was pretty smart about hemepath, too. He prefaced each joke with the statement, "My wife OK'd this one. I think you'll like it. It should go over better than the last." I had sympathy for him - he was entertaining a roomful of solemn scientists, many of whom were from another country. I wondered if they could appreciate the humor. Here's an example:
A woman walked into a drugstore and went up to the pharmacist's counter. She said, "I want some cyanide, please." The pharmacist was taken aback. He replied incredulously, "Miss, that is an illegal substance! I can't give you cyanide." She rummaged around in her purse for a minute, and pulled out a photograph. She presented it to him. It was a picture of her husband in bed with his wife. He looked at it for a long time, and stared her straight in the eye. "Miss, you didn't tell me you had a prescription."
On Monday night I went to the night tour of Alcatraz. It was everything I hoped it would be, and more. I was a little anxious about traveling in a big city by myself, but the concierge and the cabbie assured me that I would easily find a cab when the tour ended. I found myself irrationally sizing up people to hang with, in case something happened. Unfortunately, most of them spoke a foreign, Western European language, quickly ending my imagined intimacy. The only couple that spoke English included a Jewish Princess from the Bronx who sang the entire theme song to Gilligan's Island, loudly, in Uggs and a pink and white striped scarf, while we were boarding the ferry. No disrespect meant, but not someone I wanted to become acquainted with, despite the fact that I was impressed with her memory of all the refrains.
Here's a picture of the dilapidated industry buildings, before night fell. 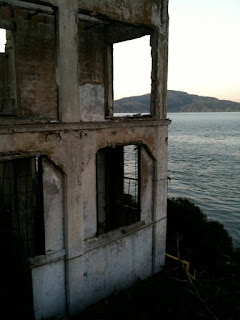 Here's a picture of a cell, waiting for an inmate. 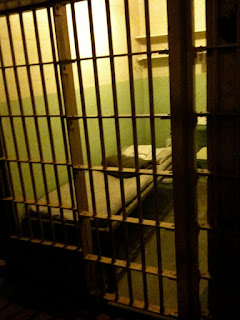 I was a little embarrassed that everyone but me had seen Clint Eastwood's Escape From Alcatraz, and The Birdman of Alcatraz, and The Rock, but they are all in my Netflix queue now, I promise. I saw the library, which was sad and dreary. And I spent some time in solitary confinement on D Block. Here is the door. 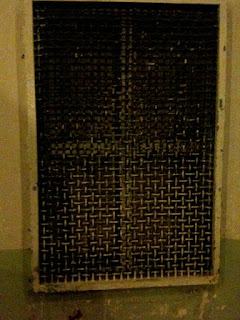 I only spent about a minute in there, but that was enough. I can't imagine the thirty days that all prisoners spent there, when they first arrived to the prison. Reform had a different definition, back then. There was one solitary block, unlike the others, with no sink or toilet. Just a hole in the floor. That was the place where you went when you were really bad. Completely naked. For days on end. Without light. Unthinkable.
On the way out, I got waylaid by a placard announcement of the prison morgue. It was sealed off in plexiglass, so I had trouble taking a picture with my flash camera. But the iphone did a pretty good job. It was built into the side of the hill, back before Alcatraz was a prison for bad prisoners - when it was just a federal prison. Here it is: 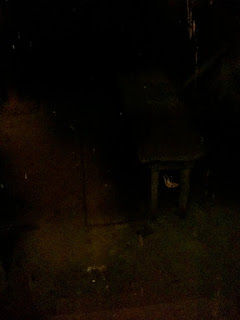 I thought my training hospital had rough morgue conditions! I hope you can see that, with the dark blog background. I love this photo. Especially since I got yelled at by the guards on the island while I was trying to take it. "Keep moving! Down to the boat!"
The concierge and the cabbie I had consulted were wrong about the taxi back to the hotel - it was rough getting one and I got scared. But I hijacked a hotel shuttle full of Dutchmen and talked the Chinese driver into taking me back to my hotel.
Wicked is an incredible musical. I can't wait to find a venue to take Sicily. It has everything you would hope to find in a fun package - political subterfuge, love, female friendship bonds, trusting your own instincts, and being alienated for your appearance. All important messages.
The last lecture I almost skipped, but I'm glad I attended. The speaker talked of brown stains, immunos, quite hilariously. Antibodies weren't just non-specific, they were promiscuous. Infidels. This unassuming elderly gentleman was randy. He was totally jazzed about the role of p16 in basal cell carcinomas of the head and neck. A large slide read: Genital-Oral and Genital-Anal transmission. Better Prognosis. He promised us all we would be reflexing our cases to molecular analysis in the next five years. "This is where we are headed."
I surfed around today, on the internet, looking for a conference for next year. I am excited already. It's a little early, but I found a possible candidate in Hawaii.
Posted by Gizabeth Shyder

I'm a big fan of "Of Human Bondage" and "The Magician" by Maugham.

Never picked up on his use of interminable, though.

I haven't read his novels. I'll have to pick one up someday. I loved The Book-Bag - for the excellent description of his feeling for books. I had much empathy. I liked the character in the Hairless Mexican a lot - some people have such passion for life it bleeds from every orifice, often comically. The Yellow Streak was another good one - echoed the persecution of others that stems from our own inadequacies we see over and over again in the media.

I may have OF HUMAN BONDAGE around the house somewhere. I'll look, and if I have it I'll bring it down to you today. Bill

Thanks Bill! I heard you were stopping by and hope I don't miss you. Thanks for all your help with the kids when I was in San Francisco.

YOu almost made fall out of my deerstand.

If I had been in a deer stand, I would have certainly fallen out. You had me going with the stuff about your new companion. I was getting really uncomfortable reading it, making the punchline a really nice relief!

That Madeline is a cute kid. Parker got her hair cut today for the first time in almost a year, and I pulled up that photo for the hairdresser to use as a model. My child's head is now sporting a serious style thanks to you and your little friend!

I certainly didn't mean to make anyone fall out of a deer stand!

Maddie does have a wonderful do, and she made some mad art on my iphone. With parents like wonder twins Amy and Jesse, she is destined to go far.

Speaking of prodigious offspring, I can't wait to see Parker's new cut. You need to post it on your blog!