Where the Rivers Meet the Ocean 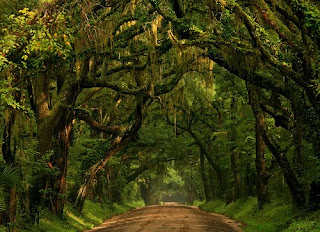 That's where we are flying this Saturday, for a whole week!  Edisto Island, South Carolina.  To a small community called Jeremy Cay.  The island's population is a little over 2100.  There is one grocery store, a Piggly Wiggly.  We get to stay in a big beach house for a whopping $250 for the whole week, because Ike's Aunt Esta knows the owners, and lives next door.  She promises early morning turtle watching on the shore, and sent pictures of giant Man-O-Wars that wash up on the beach.  I've never been to the beach in South Carolina, and this one boasts a rich history, on the website.  There is also a serpentarium!
Edisto Island was the vacation spot of choice for the rich South Carolina plantation owners who wanted to beat the heat and mosquitoes pre-civil war.  The Edisto people gained their riches by producing slave-picked cotton that rivaled Egyptian threads.  Their cotton was exported around the world, and was even used to adorn the pope.  An exclusive community was created, with fancy beach houses, a posh hotel, and the all important saloon.  All of this was destroyed in the Civil War, with the help of a few natural disasters, and the remnants of the by-gone era continue to wash up on the shore:  bricks, plates, and other physical manifestations of history.
I had never heard of Edisto Island, but have mentioned our journey to a few friends who recognize the name as being the best vacation spot in South Carolina.  I tried to buy a book about it today, called Tales of Edisto, but it's not at Barnes & Noble or Wordsworth - my two most frequent haunts.  Oh well.  I have enough books to read.  And I remember being enthralled, as a teenager, with everything Pat Conroy wrote, including his non-fiction.  So I have high hopes for Low Country - can't wait to see the large Oaks draped in Spanish moss and breathtaking sunsets - where the rivers meet the ocean.
Posted by Gizabeth Shyder

Have fun! C and I are going to Philly for a week and Florida for a week in July. Can't wait. I've wanted to go to the Atlantic Coast for a while, though, but never seem to get out there. Remember -- a Man O' War can seriously hurt a person!

Thanks! All Mike's cousins are coming so it should be a blast - we haven't seen that crowd in five years. One cousin is proliferating, so C and J should have some good playmates.

No problem getting Tales of Edisto once you're here, try the Edisto Bookstore or the Edisto Island Museum Shop. There are two other books about Edisto worthy of a recommendation: Edisto A Sea Island Principality by Puckett and Edisto: A History by Spencer.

Have a great vacation!
Bud Skidmore

Hey thanks a bunch! I hope I didn't garble any of your history - I was reading so fast. I figured I might find that book in Edisto and was hoping to buy it.

Thanks also for the website recommendations - looking forward to seeing your neck of the woods.

have a great time!!
t