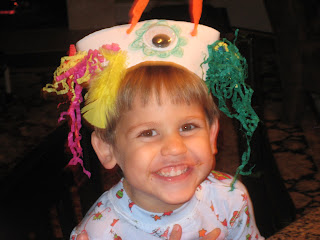 It's John's fourth birthday today, and we just wound down a family dinner with cupcakes and candles.  I can't believe it has been four years since my water broke six weeks early while I was walking on the treadmill.  It wasn't  a gushing, dramatic break like the one I witnessed when I was seven and my little brother was coming ("What is happening, mom?  Are you peeing on the floor?"  I whispered to my sister, " That's a LOT of pee") but a slow trickle that made me wonder if my bladder was betraying me.  Nope, pink-tinged serous fluid - it had to be amniotic.
John was a scrawny five pounds, very unlike his sister, but he never left my side for more than an hour or two in the hospital and I took him home right away.  Luckily, my dad's pull as a neonatologist helped in that arena.  I spent almost my entire maternity leave lying in bed, chain reading, and nursing John.  At night he glowed under the eerie blue lights of the bili blanket that my dad smuggled home from the hospital when John was looking too yellow.  I felt like I was nurturing a tiny alien.  By his due date on July 5, I had doubled his weight to over 10 pounds.  I am more proud of that than anything I ever accomplished in school.
John's first outing came unexpectedly.  I was at home alone with John, and the phone rang.  I answered.
"Lizzie?  Is that you?"  The voice sounded frantic.  The only person that calls me Lizzie, in my adult life, is one of my best friends from residency, Trisha.
"This is Jim.  Trisha's husband.  I'm out of town on business, and Trish is in the ER at St. Vincent's.  It was a bike accident.  Can you please go be with her?  I can't catch a flight for a couple of hours."
I packed John up in the infant seat - he was only a few days old and it dwarfed his premature body.  I drove to the ER, which is only about a mile from my house, and wandered around until I found her in a cubicle.  She was sitting upright in a hospital bed wearing a t -shirt and biking shorts.  Her slender athletic body was slumped and defeated, and her eyes were a little glazed.  Her golden hair was wet on one side and matted with blood.  Trish can outrun/outbike almost everyone I know, including guys.  She's also incredibly competent in the morgue and gross room.  This was the first time I had ever seen her look fragile.  I rushed over and gave her a hug.
"Trish!  Are you ok?  What happened?"
She was rounding a corner and hit a slick spot - flew off of her bike.  I asked her if she was wearing a helmet.  She replied that it had completely busted in the accident.  If she had not been wearing a helmet, her head would likely have suffered its fate.
After she told the story, I decided I needed to distract her.  I talked about my excruciating four days in the hospital, and told her about how I became so depressed I called around one afternoon and found someone who would give me a pedicure.  She did hair and feet for all the ladies in Baptist re-hab, and she was prematurely aged in the way that only a heavy smoking habit can do to a person.  I worried so much about her having to sit on the floor to paint my nails that I struggled to enjoy the experience, and tipped her heavily.
As I told the story, I stared at Trish's shirt.  It was so cool - like a pink/orange organic tie-dye.  I decided I wanted one, so I complimented it and asked her where she got it.
"Lizzie, this t-shirt is plain white.  The blood did that."  We laughed so hard her head started hurting and we struggled vainly to stop, like little girls at a sleepover after lights out.  Another blond moment.  We both can be scatterbrained on occasion, and some of the more memorable stories are frequently passed down in resident lore.
She kept asking me if she looked all right, and I assured her that she looked fabulous, as always, like a supermodel, just with a head wound.
"Do you remember that Stephen King movie, Carrie?  When she was all dressed up for the prom and then the pig's blood got dumped on her head?  You could be her, Trish!"
It took a while for the doctor to get there, and after I sat awkwardly on the stainless steel counter and covered myself with a blanket to nurse John, I jumped down, put him in the car seat, and warmed a washcloth with tap water.  I cleaned the dried blood from her face and neck, taking care to avoid the gaping wound.  She wasn't feeling great, so we spent a lot of time not talking.  Finally the doctor arrived, shaved her head around the wound, and stitched her up.  I held her hand at first, but she didn't need it after a minute or two.
The other day Trish e-mailed me about anxieties of leaving her toddler daughter for a four day trip to Boston for a conference.  She is pregnant with her second child, a son, and I find it endlessly amusing that she is slightly freaked out that there is a penis growing inside of her.  I never really thought of it that way, when I was pregnant with John.  I e-mailed her back.
What?  You are afraid of planes, but you still bike?  Crazy, T!
Posted by Gizabeth Shyder

i have not laughed this hard in awhile!! i had to shut the door to my office....your description of me is too generous!! what a friend you are!!
t

I'm glad you liked it! I had fun remembering it. I'm going to call you for details of two other blond moments (yours not mine) I am struggling to remember . . .

Lizzie, you were a life saver for me that day. If you need anything around four days after September 26 (our due date), give me a call and I'll be there.
Jim

I'll be sure to stay off of a bicycle until Luke is at least a year old! Hopefully I will never need you -- nice to know I have something to cash in, though. Have fun in Boston - enjoy a few days to yourselves before #2 comes along . . . it's a shell shocker!