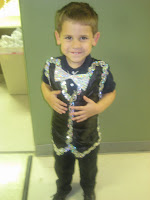 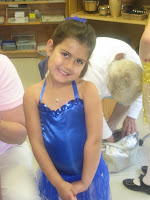 The other evening John, Sicily and I were headed home after their dance recital.  They had balloons in tow - Sicily had tied hers to a pink carnation on the way home and John had managed to detach his from his string so it was floating dangerously around the car.  As I pulled up the the front of the house and opened the door, I gave them the same warning I had given earlier on the way to the car from the school.
"Make sure you hang onto your balloons until you get in the house.  If you let go, I can't save them."
Sicily replied confidently, "I'm not worried mom - it's not going anywhere tied to my flower."
John retrieved his green balloon from my hand and climbed out of the car, carrying it in a choke hold.  I laughed looking at him - his black pants, shoes, and black vest with sequins, along with his mischievous smile, reminded me of a mini version of a circus sideshow flim-flam man.  Sicily looked much more prim and proper in her royal blue leotard and lace tutu.  They walked carefully with their balloons to the front porch and I hurried to gather school clothes, shoes, dance bags so I could get the key in the door as quickly as possible.  As I was turning the lock, I heard a sharp intake of breath and I whirled around quickly to see John's head between his hands, crouched down on the front porch.  The balloon was no longer with him.
It only took a few seconds for his low moan of loss to reach ear pitch and change to loud, reeling sobs.  I looked up; the balloon was sailing into the tree.  I cursed silently as I ran in the house to drop my armful, quickly returning to the porch to gather John in my arms and comfort him.  Anyone with a three year old knows that this kind of loss can ruin the rest of the evening.  I carried John into the kitchen and looked him in the eye.
"John, do you hear that?"
He answered quietly, sniffling.  "What?"
"Do you hear the birds?  They are so happy!  They are singing about how wonderful you are to have given them your balloon.  They've never seen a balloon before."
He stopped crying.  I was encouraged, and continued.
"And the squirrels!  They are very excited.  They are all jumping to your balloon to check it out.  And the ants are wondering, what in the world is this?  Is this from John?  He is our favorite boy in the whole neighborhood!"
John was smiling now, proud of his donation to the tree kingdom, and I was equally proud of my quick thinking.  I did not anticipate Sicily's response.
"I want the squirrels and the birds to like me, too!" she wailed, and quickly ran over to the scissors drawer to free her lavender balloon from its carnation anchor.  We all headed out to the front porch to watch as Sicily proudly released her dance recital favor.
We walked to the end of the sidewalk as it kept floating farther up in the sky.  It quickly became apparent that no tree would stop her balloon, and she wailed again, "Mommy, the birds and the squirrels are going to like John better than me!"
I squinted at the lavender orb floating toward the sun.  I replied, "Maybe, but the space aliens are going to be very happy with you tonight."
Sicily danced toward the house happily, placated.

you are such a good mom! there is no way i could have thought of something that quickly!
-Renee

I am usually not that quick to I have to brag about it when it happens!

how cute!! you are so creative!