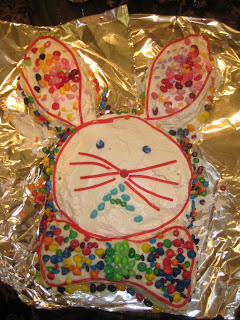 We're partied out (three this weekend!).  My mom, the kids and I made a red velvet cake with homemade cream cheese icing today.  You should have seen the sugar coma we induced in the kids.  Now that would have been a great picture.
Luckily, future uncle Dave counteracted the initial hyperactivity with a post-prandial trampoline super jump.
Annie's favorite part:  When John announced a kissing game after Vino's pizza.  "Now!  Ereybawdy wisten.  You have to tiss.  On da cheek.  Dave tiss Annie.  Grampa tiss Bapsha.  Daddy tiss his mommy.  I tiss Sicily.  Sicily tisses mommy.  O-tay.  Tiss."
Hard to deny a three year old's wishes.  After all, he did blow out the candles.
Saturday was great too.  Mrs. Jacobs announced that Ike's smoked chicken tasted "like butter."  I believe that Helen tried on every dress that Sicily owned -- I caught her trying to squeeze into the Queen Elizabear dress right before dinner.  I warned her that it might not work.  I remember trying the same thing when I was her age and got the bear for my birthday.  Lily looked superfab in the orange velvet mod pumpkin girl dress.  And Annika was so cute in the Easter dress with Sicily's pink panda.  John played dragon and wizard.
Friday was date night.  Warning:  Do not order the chef's special with wine pairings at Ashley's unless you have eaten massive amounts of carbs to soak up the copious quantity of wine they pour with each tiny entree.  We gave them the credit card and the twenty-something waitress (I loved her - she mistook me for an old friend she used to listen to New Kids on the Block with  -- "This is gonna sound really weird but is your name Mary?" and looked genuinely shocked when I told her I was way too old for New Kids on the Block -- she made my entire weekend) told us we couldn't pay because we had two more courses left.  We told her we didn't care.  We needed to drive home while we were still capable.  Next time (in a year maybe - when we can afford it again), I think we might need a cab for that dinner.  We laughed Saturday with Ian and Carrie, who had the exact same experience the weekend before, for Carrie's birthday dinner.  Carrie is friends with the chef and his wife, and felt bad when she couldn't remember the dessert she had to describe to Martha.  "Not that it wasn't memorable, there was just so much wine on board!"  I do remember the frog legs.  They were yummy.  Ike was mortified that I ordered them.
I could tell Ike had a great weekend.  Although he said at one point, "I was kind of hoping it would go by unnoticed."
A birthday?  In this household?  Impossible.
Posted by Gizabeth Shyder