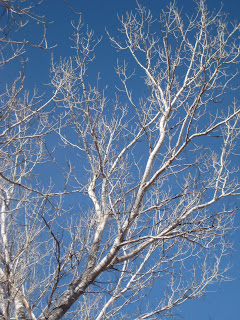 It's just that mean old Texas sun
It makes me dizzy, dizzy, dizzy in my head
Love that villain on the run
He's got me spinning 'round and falling on my head
And dizzy . . . in my head
-- Throwing Muses
I love this song.  And it was going non-stop in my head in Amarillo.  Especially when I was running.  Running in Amarillo is an unparalleled experience.  Any single bead of sweat that attempted to materialize on my body was instantly vaporized by the intense wind, which occasionally carries the stench of cow manure from the invisible yet ever present stockyards.
I got to hike the Palo Duro Canyon, which was amazingly beautiful -- almost as impressive as the Grand Canyon.  The trees were leafless (as evidenced above) but the bugs were slowly starting to emerge from their wintry slumber.  The temperature in Amarillo is as labile as my three year old John's moods - 30's at night, 50's in the morning and evening, and 80's in the afternoon.  I wasn't sure, while running, if I was getting sunburned or windburned.
Route 66 is a little disappointing.  It is evident, during a quick drive-by, that there is a community attempt at work to revive the historic district, but currently it falls flat.  Maybe we were outside the tourist season, because everything was closed.  But I did get to see some of the infamous road signs.  My fave was about Lizzie Borden, of the forty whacks fame, with whom I identified, in namesake only, when I was growing up.
The twins were not disappointing.  Except for the fact that I was disappointed in myself, as a human being, when comparing myself to my sister-in-law, who makes having twins look like a walk in the park.  Neither was the Vino's stabbing story.  She was stabbed randomly in the back, in a mosh pit, listening to an early 90's band whose name I recognized at the time, but now it escapes me.  She intelligently declined to prosecute, since another victim that night did.  Her reasoning:  "Why, in my early 20's, would I draw extra attention to myself by placing a name in the perp's head, when I could just heal anonymously?"  Well, as anonymous as you can be when you are a beautiful 20-something in the ER at UAMS with as many residents and attendings as can fit in the room staring at the stab wound right above your butt.
We drove home Tuesday.  I love being off work, and at home.  Except for the fact that I manically invited around 30 kids to my house on Saturday for Sicily's b-day while bored at work, and I can't seem to make more than 7 CD's for party favors.  Itunes is slamming me with copyright issues, even though I swore I read about three weeks ago in an article on the New York Times that from now on, once you buy a song in itunes, it is no longer policed -- it is yours.  So I'm confused.  Nothing new, in the technical arena.  Hopefully my mac teacher can help me out during class tomorrow.
Posted by Gizabeth Shyder

sounds like you guys had a great time. does she really make it look easy with twins??
t

Well, she took both twins while we hiked, and painted with cecelia and a neighbor's kid, and baked a cake. With twins. I would have exploded. She just smiled and had a glass of chardonnay.