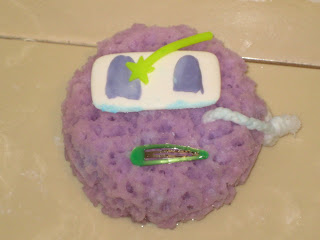 . . . is one of the things I love about being the mother of a five year old.  This was in my shower Monday morning.
I must've left her to her own devices longer than I thought while I was making a goodwill sweep.
I never would have encountered this B.C. (before Cecilia).
This was on the kitchen window, looking out into the backyard.  The medium in the middle is play-doh. 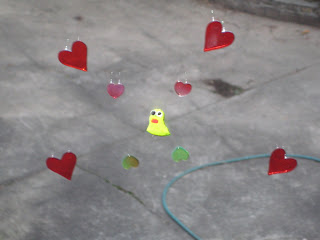 "The Land of the Living Dead" 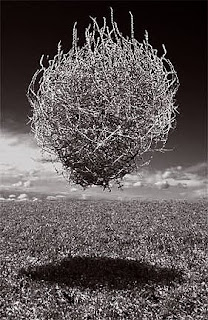 That is what Ruby, in Bob Dylan's "Brownsville Girl"  dubbed Amarillo, Texas.  I still remember my dad playing Dylan on the way to school when I was little.  Clearly Ruby was not as excited to be in Amarillo as I am to visit next week.
I have never been to Amarillo, Texas.  I am dying to see a tumbleweed.  I hope it looks as incredible as this one.  My husband Ike assures me I will have plenty of opportunity - he and Sicily visited my brother-in-law and his wife there a couple of years ago.  I couldn't get off - I was still in residency and all of my vacation was eaten up by maternity leave for three years in a row.  To all of you who call maternity leave vacation:  I stick out my tongue and make a noise I cannot spell.  Not that I didn't enjoy the six weeks home with baby Sicily and John, but it was a lotta work - no vacation.
I plan not to repeat the grave error we made last year on our road trip to Eureka Springs.  We decided to let Sicily and John pick out anything they wanted to eat in the convenient store - they chose cheese puffs.  So we uncharacteristically assented and abandoned control of the large bag of neon puffed petroleum products to the 5 and 2 year old in the back seat.  They were happily munching away, tossing them back with swigs of milk from their sippy cups, and we congratulated ourselves on the hedonistic behavior that allowed us to zone out to our choice of tunes without any whining from the back seat.
Ike said, "Let's take the Pig Trail!"  I agreed, forgetting that my past experience with Ike driving up the Pig Trail often ended in vague nausea that persisted for a couple of hours.  I was not thinking straight when John complained of a tummy-ache about 3/4 of the way up the windy, steep, mountainous Ozark scenic road.  I replied, "You'll be ok!  Just sit back and look out the window."
So I should have not been as surprised as I was when John projectile vomited cheese puffs and sour milk all over the back seat of my new Forerunner.  The enormous quantity defied rational stomach capacity of a two year old boy.  We were in the middle of nowhere, but the stench required us to stop the car immediately.  Easy gag reflex Sicily was threatening contagious spew, so we had to be quick about it.  Luckily, I had the foresight to buy a pack of wipes at the gas station; my OCD brain was not thinking of puke but of cheese puff fingers in my car.  I stripped John down and removed the car seat cover, stuffing them into a plastic bag.  Ike grabbed the rubber car mat (which had taken the brunt of the calamity) and ran off into the forest.  As I took care of the kids and cleaned off my leather seats, I became mildly frustrated at his absence.  Then he came back with a clean, dripping wet car mat, seemingly magical.
"Where did you find water?"
"In the stream."
"What stream?"
"In the forest."
He turned around.  I asked, "Why do you have a gaping hole in the back of your t-shirt?"
"I do?"
"Yes."
"It must have gotten caught on the barbed wire."
"What barbed wire?"
"When I jumped the fence."
"Why did you jump a fence?"
"To get to the stream."
Despite the fact that I felt like I was stuck in the song "There's a Hole in the Bucket,"  myself being Eliza and Ike being Henry, I was impressed.  We managed to extinguish the smell quickly, and make our way to Eureka.  I hand washed all the emesis-filled items in the footed tub as soon as we got there.
Many of my friends are vacationing in tropical locales this late winter/early spring.  Hawaii, Rio (for Carnivale), and Costa Rica.  You might think I am jealous, but you would be wrong.  Amarillo has something those places haven't got.  My brand new niece and nephew twins, now five months old, ready to meet.  My pathologist brother-in-law - I am excited to see his hospital/practice for the first time.  My amazingly beautiful (Raphaelite - according to my former chair), intelligent (she is defending a thesis in Dallas this week), and artsy sister-in-law.  I can't wait to pick her brains about how she got stabbed at Vino's in the back, which I learned on her facebook 25 random things.  Her ultra-calm personality is antithesis to inviting knife wounds. 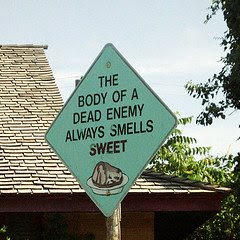 Amarillo also has signs like these, which are scattered around Route 66 (a Nat King Cole song).  An eccentric billionaire named Stanley Marsh III sponsors these random artistic road signs.  There are over 200.  There were so many cool ones on a website I found I couldn't decide which ones to post.  The one below is Igor.
"Art is a legalized form of insanity, and I do it very well."
Stanley Marsh III 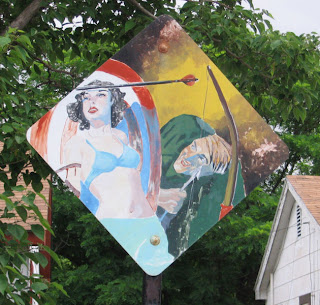 By Freezepop.  My new anthem.  She totes a microscope.
Definitely going on Sicily's science birthday CD.
Better on itunes than youtube.  Check it out.
Posted by Gizabeth Shyder No comments:

I went into a birthday invitation place after calling twice the other day - apparently they were having a hard time finding a science-themed birthday invitation.  Sicily turns six in a couple of weeks and I have waited way too long to order online.  I grabbed the box containing hundreds of kid birthday invitations but my search was futile.
Had I been searching for a princess birthday invitation, I would have been in luck.  There were probably over a hundred.  I would have loved to have found a princess scientist.  When I went on line and googled women in science cartoon images there was an appalling paucity of material.  Take the one above, for instance.  Not that I am knocking her individuality, by any means, but as a 5-year-old would you have wanted this to appear on your birthday invitation?
I eventually enrolled each store assistant in various ways to help me.  One was looking online at a site where I had found one cute science invitation earlier in the day - we were trying to cheat and figure out the manufacturer, but they were too smart.  Another was going through large notebooks full of invitations.  No one at the shop could ever remember having a request for a science-themed party.
"Aha,"  cried a clerk.  "I've found one."
It had a mini-Albert Einstein with glasses and a bunch of equations on the chalkboard.  It also had two things wrong with it.  1) no girl, which I would have been willing to overlook, and 2) it was the same invitation that was for a boy's science party that I was pretty sure Sicily was remembering as she created her ideal party upon my query last Sunday afternoon  ("At the house"  "CD's for party favors" "A science show" "vanilla cake").  So I rejected it.
Frantically I searched my memory for the "Add-ons" that the Mad Science representative I had booked earlier in the day had touted for an extra $25.  Cotton Candy making, Static Hair, and Laser Light/Indoor Fireworks show.  Hmm.  Fireworks.  Fourth of July.  There's an angle!!
I grabbed the Fourth of July Box and found a nice watercolor of sparklers.  I also found a lone multicolored firework display (apparently, on Fourth of July invitations, red, white, and blue fireworks command the great majority -- all others are heavily prejudiced).  The multicolored firework display was discontinued - go figure.  Probably not prejudice - just lack of sales.
Last night I overheard Ike explaining to Sicily the meaning of "tomboy" in a positive light.  It made me wonder if someone at school had used the term negatively, so I went in the kitchen to investigate.  Apparently, she had wished she was a boy aloud, so she could openly enjoy boy things, such as camping, fishing, and hunting.  I told her, "There are no boy things or girl things.  Just things.  You can do whatever you want.  Except stand up while you are going to the bathroom.  And you can do that if you want, but it might be messy."  Sicily giggled.  Ike agreed.  Apparently clip art creators and kid birthday party invitation manufacturers need to take some lessons.
Posted by Gizabeth Shyder 3 comments:

Faith is a fine invention
When Gentlemen can see
But Microscopes are prudent
In an Emergency
Emily Dickinson
Posted by Gizabeth Shyder No comments:

Tonight I was trying to wind the kids down early - they had been camping overnight with their dad Saturday night and a rogue boy scout troop so I could spend some much needed one-on-one time with my best friend from medical school (we saw a fabulous movie - I know everyone has already seen it, but for those that haven't - GO SEE SLUMDOG MILLIONAIRE).  Sicily was the only "kid girl there," as she put it - and I think that even her bold personality was intimidated by all the eight year old boys.  John, on the other hand, fancied himself an eight year old boy and jumped right in.
"Mom, I hode a tadpoe!  We got two fishes! I ate batin for breatfist!"
When they got back Sunday at around eleven I had a mad schedule prepared that blatantly ignored the fact that they were up too late telling ghost stories around a campfire and completely worn out from all the johnboat/four wheeler riding.  I dumped them into my large swimming pool-like bathtub, hauled them out West to Ridgefield to visit my friend's 20 month old daughter (who had stayed with her grandparents overnight) and her parents, and then downtown to the Children's museum for a birthday party.  I figured that they would be so worn out that they would veg and watch movies all late afternoon/early evening, but John followed me out to the backyard where I was reading my book and puttered around, and Sicily demanded my participation in the party gift art project.
I decided to start bedtime at 6:30, and tucked them into bed with books - finding hidden animals in the wild for John, and James and the Giant Peach for Sicily.  When we started brushing teeth before song, Sicily had shed her earlier angst and frustration that had built up while they were taking turns doing interpretive dance to Beethoven's Fur Elise - I was continually winding the small wooden music box that was a present to John from my mom from Germany.  John kept talking during her performance - each small utter from him precipitated a large scale melt-down from Sicily.  Anyway, they were back in good spirits, and Sicily was singing again.  She created a twist on an Incubus song that had me in stitches.  She turned to me seriously, flayed her arms out in all directions, mouth covered in toothpaste and belted out "Pardon me while I burp!"  I started laughing, and John joined in singing her new version.  They danced around the toilet, singing it over and over.  Sicily knows the right words, because she made me explain them to her.  But she said, "Isn't this way better mom?"
Yes, much.
Pardon me, while I burst.
Posted by Gizabeth Shyder No comments:

The Art of Being Invisible